I haven’t seen a lot of acknowledgment of this in the blogosphere, so it’s probably worth passing along this piece about Chuck Hagel in today’s LA Times:

President Obama’s choice of the former Republican senator, whose nomination received another setback Thursday, looked, on the surface, like a gesture of bipartisanship. But to many of his former colleagues, it’s anything but.

Hagel was seen as a tacit supporter of Obama in 2008 rather than Republican nominee John McCain — one of the senators key to his chances of confirmation. Just 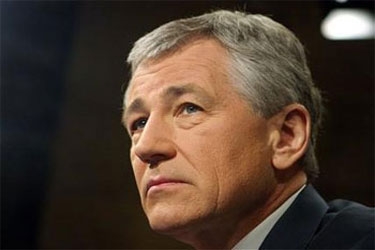 last year, Hagel endorsed the Democratic candidate for Senate in his home state of Nebraska against Deb Fischer, who went on to win and is now a vote against him.

In Washington’s highly polarized environment, the Hagel nomination has become an object lesson in the dangers of crossing the partisan divide. Hagel “was anti his own party and people. People don’t forget that,” McCain said in a Fox News interview. “You can disagree, but if you’re disagreeable, people don’t forget that.”

“In the name of bipartisanship, the president selected a nominee who really stuck a finger in the eyes of a number of Republicans,” said William Galston, a Brookings Institution scholar and former aide to President Clinton. “If you’re seen as a turncoat or an apostate or a traitor, then that’s bound to have an effect on the mood of the proceedings.”

I bow to no one in my belief that Republicans have gone off the rails in their opposition to Hagel. I don’t buy for a second the argument that, hey, maybe Republicans have some legitimate questions about Hagel’s role in drone warfare. There might be legitimate questions about his role, but the actual Senate hearings have made crystal clear that among Republican ranks, they couldn’t care less about that. They love drones. They’ve asked no substantive questions about that at all. It’s all Israel, Benghazi, Israel, Iran, Israel, “Friends of Hamas,” and Israel.

At the same time, I’ve read a few too many people claiming that the real craziness here is that Republicans are objecting to a fellow Republican! But they’re not. Hagel is an apostate, which makes him even worse than a Democrat. As near as I can tell, most Rs feel about Hagel roughly the same way Dems feel about Joe Lieberman.

So yeah, this is personal. It’s crazy and off the rails, but it’s also personal.