Greg Sargent calls our attention to a new study on rising income inequality today. The question at hand isn’t how much inequality has increased over the past couple of decades, it’s where the 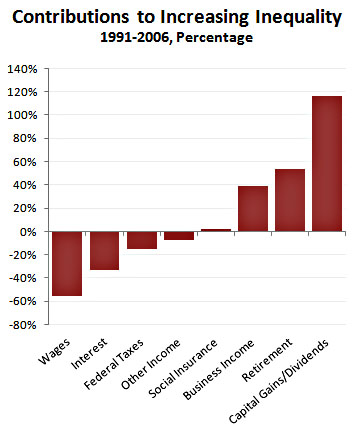 increase has come from. The study is from Thomas Hungerford, an analyst with the Congressional Research Service, and the chart on the right tells the story:

As Hungerford put it in an interview, “The reason income inequality has been increasing has been the rising income going to the top one percent. Most of that has come in capital gains and dividends.” Sargent relates this to the current sequester talks:

This finding is directly relevant to the current debate, because Obama and Democrats want to offset the sequester in part by closing loopholes enjoyed by the wealthy, such as the one that keeps tax rates on capital gains and dividends low. Dems want to do this in order to prevent a scenario where the sequester is averted only by deep spending cuts to social programs that could hurt a whole lot of poor and middle class Americans. Republicans oppose closing any such loopholes and want to avert the sequester with only deep spending cuts.

If higher rates on capital gains were bad for growth, Obama’s proposal might be a bad idea. Maybe higher inequality is just the price we pay for a vibrant economy. The problem is that there’s very little evidence that low rates on capital gains have any effect on economic growth at all. In fact, you can make an argument that current rates are too low. It’s possible that higher rates might benefit the economy.

Bottom line: If you care about rising income inequality, you should care about capital gains because that’s mostly where the skyrocketing income increases of the past couple of decades have come from. And while the fiscal cliff deal raised rates on capital gains and dividends slightly, there’s still plenty of room for them to go up more. Done within reason, this is very unlikely to have a negative impact on economic growth, and it would be about the fairest possible way to increase revenues.