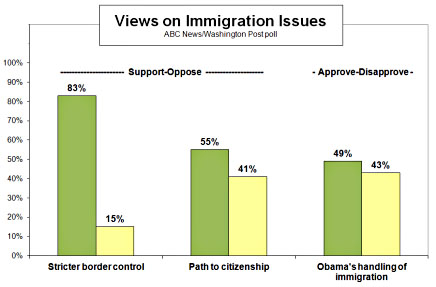 ABC News reports that their latest poll is good news for President Obama:

Public approval of Barack Obama’s handling of immigration has jumped to a career high in the latest ABC News/Washington Post poll, buttressed by majority support for a path to citizenship for illegal immigrants and, much more broadly, endorsement of stricter border control.

….Obama’s approval rating on immigration is 11 percentage points higher than it was seven months ago; disapproval, down by 9 points. His approval score now numerically beats his previous best, three months after he took office, albeit by a single point.

Well, maybe. But a good rule of thumb is that on any contentious issue, you’d better start with at least 60 percent support. Two-thirds is even better. Because once the attack ads start running and the radio bloviators start bloviating, those numbers are going to slide downward. If “path to citizenship” is only polling at 55 percent before this stuff starts, it’s not likely to stay in majority territory for very long.

This confirms two of my beliefs about this issue. First, passage needs to happen quickly. The longer it drags out, the more likely it is that support will drop below critical mass. Second, Marco Rubio is key. If he can get the Fox/Drudge/Limbaugh axis to moderate their opposition, conservative support might get wobbly but nothing worse. If he fails, and they go into full flamethrower mode, this isn’t going to end well.