The U.S. military launched 506 strikes from unmanned aircraft in Afghanistan last year, according to Pentagon data, a 72% increase from 2011 and a sign that American commanders may begin to rely more heavily on remote-controlled air power to kill Taliban insurgents as they reduce the number of troops on the ground

….The use of armed drones is likely to accelerate as most of the 66,000 U.S. troops in the country are due to withdraw by the end of 2014. The remotely piloted long-range aircraft, which kill 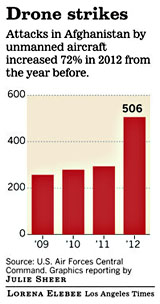 targets with virtually no risk to American lives, carry an unmistakable attraction for military commanders.

President Obama announced Friday that about 100 U.S. troops have been deployed to the West African country of Niger, where defense officials said they are setting up a drone base to spy on al-Qaeda fighters in the Sahara.

….The drone base in Niger marks the opening of another far-flung U.S. military operation against al-Qaeda and its affiliates, in addition to ongoing combat missions in Afghanistan, Yemen and Somalia. The CIA is also conducting airstrikes against al-Qaeda targets in Pakistan and Yemen….The drones will be based initially in the capital, Niamey, but military officials would like to move them eventually to the northern city of Agadez, which is closer to parts of northern Mali where al-Qaeda cells have taken root.

I don’t think we should expect this trend to abate anytime soon.

UPDATE: And now this: “The United Arab Emirates is close to purchasing Predator drones from a San Diego County defense contractor, sparking concern among arms control advocates….The agreement would mark the first time a non-NATO country has obtained the American-made technology, which has reshaped modern warfare.”