Jonathan Last says that fears over immigration are overblown. As fertility rates drop in developing countries around the world, they’re going to send fewer immigrants our way no matter what policies we adopt:

When it comes to immigration, demographers have a general rule of thumb: Countries with fertility rates below the replacement level tend to attract immigrants, not send them. And so, when a country’s fertility rate collapses, it often ceases to be a source of immigration

But even though they’re still above-replacement, those countries are witnessing epic fertility declines too. Consider Mexico, which over the last 30 years has sent roughly two-thirds of all the immigrants — legal and illegal — who came 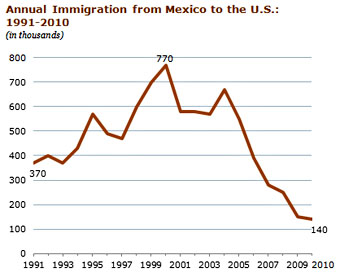 I had a funny feeling as I was reading this: I felt like I should have heard about this before. Or that I should have already known this. And yet, I’m pretty sure this is the first time I’ve seen anyone make this point.

It’s a seductive one. I have an enormous fondness for explanations that rely on big, broad trends: demographics, money flows, growth of computing power, etc. That naturally means I’m a sucker for Last’s argument here, despite the fact that I don’t really buy his whole “demographic doom” schtick about America’s falling birth rate (which he’s on a book tour promoting at the moment).

Still, the fact that Last has successfully pushed one of my buttons doesn’t mean he’s right. It just means I’m intrigued by his argument. I think I need to read more about this.