Over at Bloomberg, Kris Warner follows up on yesterday’s report on U.S. unionization rates with this chart, comparing us to Canada: 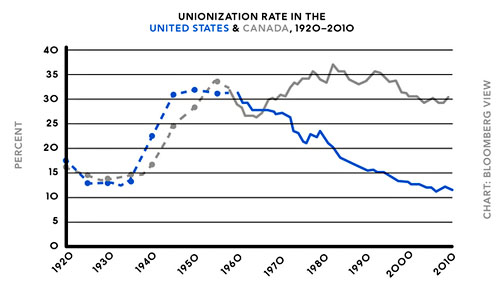 Why have union membership rates stayed high in Canada, which faces all the same globalization pressures as the United States? Mostly because Canadian labor law is more union-friendly than U.S. law, which has been gutted over the past 60 years by anti-union Republicans:

Several provinces have bans on temporary or permanent striker replacement, which don’t exist in the U.S. And there is no Canadian equivalent of the “right-to-work” laws that have been enacted in 24 U.S. states….A second distinction is the manner in which Canada enables unions to be formed….In Canada, the process is relatively quick. Card-check authorization, which is used in almost half of Canadian provinces, allows a majority of employees to form a union at their workplace simply by signing cards stating that they would like to do so….Similarly, there is an important difference in how the two countries deal with charges of illegal obstruction of union drives. In general, Canada handles such charges much more quickly than the U.S., where they often aren’t resolved until long after a union drive is over. This helps to ensure an atmosphere free of coercion and intimidation.

As a result of this, unions have spread into service industries—which are less affected by globalization pressures—more rapidly in Canada than in the U.S. So what does all this mean for the growth of income inequality over the past few decades? Here’s another chart showing inequality rates: 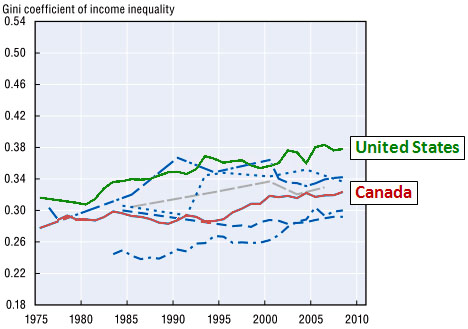 This is only one data point, and you can draw different conclusions depending on whether you look at pretax or post-tax income inequality. Still, it’s an instructive data point because the U.S. and Canadian economies are so closely bound together. In Canada, income inequality has gone up, just as it’s gone up in most English-speaking countries. That’s no surprise, largely because the Canadian economy really is similar to the U.S. economy, and subject to similar globalization pressures. But it hasn’t gone up as much, and part of the reason is probably unionization rates. Most research finds that the decline of unions has contributed to perhaps a third of the growth of income inequality in the United States, and comparisons like this confirm that. It’s not the whole story, not by a long way, but it’s a significant chunk of the story.