On the Wall Street Journal op-ed page, Donald Boudreaux and Mark Perry argue that the middle class is doing better than we liberals think. They haul out all of the usual arguments, some of which are valid (you need to count healthcare benefits as part of income) and some of which aren’t (the average is being pulled down by immigrants). But then there’s this:

No single measure of well-being is more informative or important than life expectancy. Happily, an American born today can expect to live approximately 79 years—a full five years longer than in 1980 and more 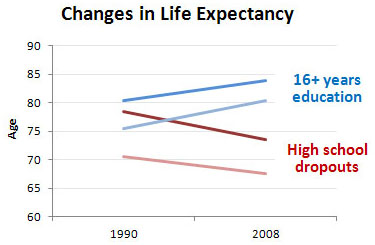 than a decade longer than in 1950. These longer life spans aren’t just enjoyed by “privileged” Americans.

Harold Meyerson is agog: “Clearly, they missed the recent study in Health Affairs which found that the life expectancy of white working class men fell by three years from 1990 to 2008, and that of white working class women by five years.” This is actually the figure for high school dropouts, not the entire working class. At the other extreme of the educational spectrum, whites with more than a college degree, life expectancies have risen by five years for men and three years for women.

The chart on the right shows the difference, with men in light colors and women in darker colors. Longer life spans, it turns out, really do depend on just how privileged you are.