Harvard University economist Richard Murnane has a new paper out trying to estimate the high school graduation rate over time—something that turns out to be surprisingly hard—and comes up with the chart on the right. Basically, graduation rates declined starting around 1975 and then started to rise again around 2000. Murnane finds 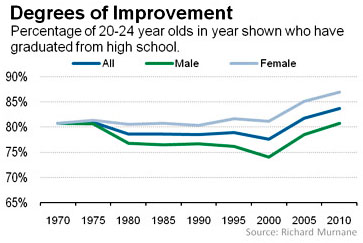 the increase since 2000 to be a bit puzzling, and Matt Yglesias, among others, wonders if this might be an effect of reduced lead exposure:

The falling graduation rate was a bit of a fake puzzle since in objective terms the economic reward to staying in school was rising during this time. But obviously teenagers are often short-sighted in their behavior, so it wasn’t a real puzzle. But if teenagers mysteriously started getting less short-sighted at around the same time they started growing up in less lead-poisoned times that certainly seems suggestive.

When I was doing research for my lead article, I stayed focused pretty sharply on violent crime. For that reason, I don’t have a lot of insight to share on this. But there are a couple of things I can say:

That said, I’d caution that there’s a very specific reason you might not see anything in the data even if lead is playing a role in graduation rates. Here’s why. Lead is something that nudges the entire population in a bad direction (lower IQ, higher aggression, etc.). For most people, the effect is barely noticeable. But for a small number, who are on the edge already, it nudges them over the edge. In the case of violent crime, it might have pushed an additional 2-3 percent of the teenage population over the edge into a life of crime. But since only a small percentage of the population commits violent crimes in the first place, an effect like this could double or triple the crime rate, and this is something that would show up like a beacon in the data.

Education is just the opposite. If the dropout rate is, say, 20 percent or so, and lead increases that by 2-3 percent, that’s a very small effect that could easily be swamped by other factors, including measurement error. It’s much harder to tease this out of the data, no matter how good the data is. In fact, it’s small enough that it might be impossible.

So the chances are that we’ll never know for sure how big the effect of lead exposure has been on high school graduation rates. Given what we know about lead, it’s a good bet that it did have an effect in the postwar era. We’ll just never know how much.