Today brings two very peculiar columns. First up is Jonah Goldberg, with this mighty odd way of framing his distaste for allowing women to serve in combat roles:

What if, during the presidential campaign, Mitt Romney had accused President Obama of wanting to let servicewomen serve in combat? After all, Obama had hinted as much in 2008. What would Obama’s response have been? My hunch is that he would 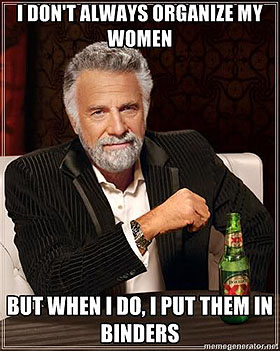 have accused Romney of practicing the “politics of division” or some such and denied it.

Really? The hook for the whole column is Obama’s imaginary response to an imaginary question from Mitt Romney? That’s the best he could do? My hunch is that Romney didn’t mention this because he was in enough trouble with women already, and my further hunch is that if he had, Obama would have said it was under review but that he was generally in favor of equal opportunity etc. etc.

Next, Ed Kilgore draws my attention to a lengthy tirade by Kirsten Powers about President Obama’s war on Fox News. I guess that’s fine. After all, it’s no secret that Fox isn’t his favorite network. But what is it that set her off? Apparently it was the answer Obama gave when Chris Hughes asked him if it was possible to establish better relationships with Republicans:

One of the biggest factors is going to be how the media shapes debates. If a Republican member of Congress is not punished on Fox News or by Rush Limbaugh for working with a Democrat on a bill of common interest, then you’ll see more of them doing it.

That seems….unexceptionable. How did that turn into the latest evidence of a nuclear war on Fox? Beats me.

I dunno. Something in the water today?