One obvious question about my story on the link between lead poisoning and violent crime is why I focus so heavily on gasoline lead. What about lead paint in old housing stock? Isn’t that just as important?

The answer is simple. My focus was on the rise and fall of crime in the era after World War II, and lead paint didn’t play a big role in that. During that era, exposure to lead from paint was fairly stable, possibly declining a bit over time as lead paint was phased out, and it probably contributed to a generally elevated level of crime during the entire period. But because it was fairly stable, it didn’t contribute to either a dramatic rise or fall in crime.

But what about earlier? Use of lead paint did rise substantially in the early 20th century, so why not look at that? Again, the answer is simple: we don’t have reliable crime statistics going back that far, so it’s hard to draw any firm conclusions about the effect of lead paint on crime.

But here’s one of those interesting tidbits I mentioned yesterday that I didn’t have room for in the main article. It turns out that there’s one crime we do have good long-term data for: murder. Murder has always been pretty easy to define and it’s always been fairly reliably reported. It’s only one data point, but does it fit the lead hypothesis?

Here’s what we’d expect. Lead paint use rose in the early 20th century, peaking in the teens and then dropping. Then, in the late 40s, gasoline lead started to rise, peaking in the 70s and then dropping. Since lead primarily affects small children, you’d expect that kids exposed to lead paint would grow up and become more violent in the 30s, then taper off, and then become more violent again in the 60s. It should be a double-humped curve.

And guess what? That’s exactly what we see in the data: 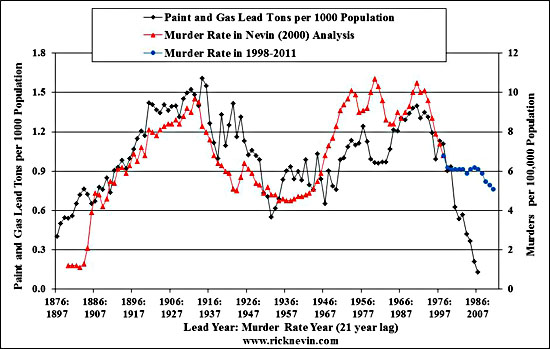 As usual, I want to caution everyone about trying to infer too much from this. Lead isn’t the only cause of crime, and getting rid of it won’t necessarily return us to the crime rates of a century ago. Crime is driven by culture, by guns, by poverty, by race, by drug use, by demographics, by policing tactics, by incarceration, and more. Nevertheless, the close match between two unusual curves like this is striking. We don’t have much data going back before World War II, but what data we do have offers yet more confirmation of the link between lead and crime.

Needless to say, this also confirms the importance of cleaning up lead paint as well as lead-impregnated soil. Lead paint isn’t a big part of the postwar crime wave story, but lead is lead, and higher levels produce more crime, more learning disabilities, lower IQs, and lower lifetime earnings. Wherever it is, we need to clean it up.