David Brooks says that spiraling Medicare costs, which the American public shows no willingness to rein in, are going to inexorably squeeze out other programs over the next couple of decades:

Advocates for children, education and the poor don’t even try to defend their programs by lobbying for cutbacks in Medicare. They know that given the choice, voters and politicians care more about middle-class seniors than about poor children.

So far, defense budgets have not been squeezed by the Medicare vice. But that is about to change….As the federal government becomes a health care state, there will have to be a generation of defense cuts that overwhelm anything in recent history.

This, he says, is why Obama has nominated Chuck Hagel to be defense secretary. Obama knows that the defense budget needs to be cut, and he thinks Hagel is the guy who can do it.

Although I agree that Obama wants Hagel to cut Pentagon spending, I’m less pessimistic than Brooks about healthcare funding for two reasons. First, Brooks thinks that “Democrats had their best chance in a generation to raise revenue just now, and all they got was a measly $600 billion over 10 years.” That’s true, but this was an outcome based on the politics of 2012. Healthcare is a long-term problem, and the politics of taxes may change dramatically as the necessary tradeoffs become clear and political coalitions change in the future. I wouldn’t be 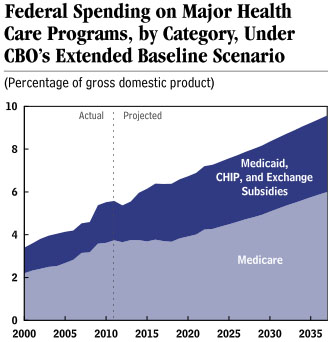 at all surprised if taxes rise fairly significantly over the next decade, especially if the Republican Party continues its headlong plummet into regional and demographic oblivion and can no longer offer any serious opposition to tax increases.

Second, Brooks says flatly that “there are no conceivable tax increases that can keep up” with projected Medicare outlays. But this simply isn’t true. Even the usual scary CBO projections only suggest that federal healthcare spending (Medicare+Medicaid+CHIP+Obamacare) will rise from about 5 percent of GDP today to about 9 percent of GDP by 2035. That’s nothing to sneeze at, but at the same time it’s hardly inconceivable that we can raise taxes by 4 percent of GDP over the next two decades. That’s a very long time to assume that American politics will stay the same as it is today.

What’s more, there’s some good news on the healthcare front: we’re now in our third straight year of low growth rates for healthcare spending—and that’s before any of Obamacare’s cost containment measures have kicked in. Is this just due to the recession? Maybe, but it’s actually part of a long-term trend that’s surprisingly promising looking. Sarah Kliff rounds up the evidence here. Beyond that, Obamacare’s various cost-control initiatives are likely to have some effect, and so will public pressure eventually.

Put it all together, and it’s entirely possible that federal healthcare spending will rise by only about 3 percent of GDP over the next 20 years. That’s a lot of money, but it’s not Armageddon. And trying to forecast anything farther out than that is a mug’s game. We simply have no idea what the medical world will look like that far in the future.

Brooks is right that healthcare costs are by far the most important part of the federal budget going forward. Every other component of the budget is growing either slowly (Social Security) or not at all (domestic spending and defense spending). But he’s not right that healthcare will inevitably swallow everything else. We can afford to spend another 3 or 4 points of GDP if we need to, and the political climate of today isn’t necessarily the political climate of tomorrow. By the end of the decade, raising taxes modestly might not be quite the impossibility that it is today.