I’ve gotten several emails similar to this one in response to my story about lead and crime:

I am curious on your take on the soaring violence in Chicago, which is primarily located in a few small areas. It is all very weird. I live just west of the city and the Downtown is great. Even Hyde Park, where I was only last week is fine. And then we have the West and South Sides that are more akin to Baghdad, then North Michigan Ave.

There are several things to say about this. First, a car with a big engine will generally go faster than one with a small engine, but traffic and weather and other factors can change that in particular times and places. Likewise, crime can spike up or down in particular regions for a lot of reasons. Lead merely provides a sort of background level.

That said, there’s no question that lead concentrations are different in different neighborhoods. During the big crime wave of the 60s through the 80s, gasoline lead was generally a bigger problem in places where cars were densest, which was the inner cores of large cities. It was also a bigger problem in housing projects built next to expressways, which a lot of them were. And lead paint, of course, was a scourge in older housing stock. Suburban neighborhoods and newer 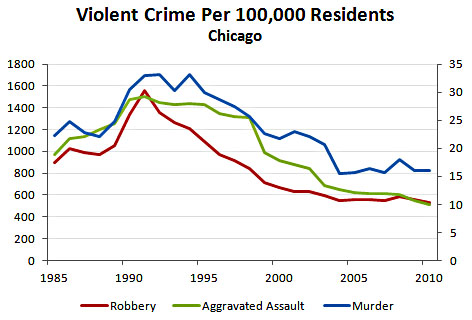 For more on neighborhood densities of lead, take a look at my magazine piece, which includes some lead maps of New Orleans put together by Howard Mielke of Tulane University. Mielke shared his maps with the local police and the association popped right out. “When they overlay them with crime maps,” he told me, “they realize they match up.” For more on Chicago in particular, Megan Cottrell had a nice piece a few months ago in the Chicago Reader.

However, even with that said, the big picture in Chicago is similar to the big picture in every other big city in America: violent crime is down. A lot. The chart on the right shows rates for various violent crimes tracked in the FBI’s Uniform Crime Reporting statistics, and over the past two decades they’re down by half or more. Occasional blips aside, Chicago is a lot safer than it was 20 years ago.