Austin Frakt passes along this chart, which made the rounds yesterday, illustrating the projected growth of Medicare over the next 20 years: 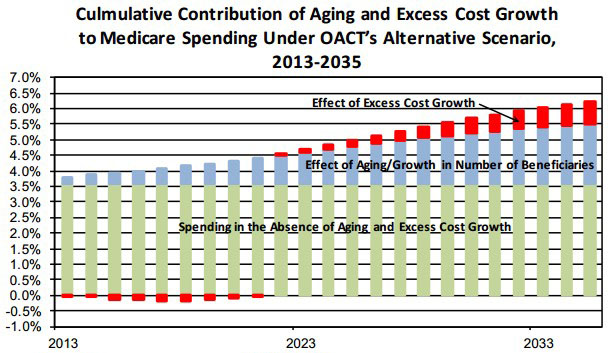 Scary! Or is it? As Austin points out, most of the growth is simply due to an aging population. No matter how much of a fiscal hawk you are, you simply can’t blame that on out-of-control spending or liberal utopianism. It’s just demographics, and it’s baked into the cake no matter how much we dislike it. This is money we’re going to spend, and the sooner everyone accepts that the better.

Then there’s the “excess” cost growth in red. It amounts to a grand total of three-quarters of a percentage point of GDP by 2035. That’s really….not so much. And even this projection assumes that Obamacare’s IPAB panel, which is designed to rein in cost growth, never gets implemented. [See update below.]

In any case, if this forecast is right, it tells us two things. First, our population is aging and we’re going to pay for that. Deal with it. Second, Medicare is going to have some excess growth above that, and we should look for ways to get that under control. But that excess growth is fairly modest; we already have laws on the books to address some of it if we just have the fortitude to follow through; and healthcare wonks on both the left and right have plenty of sensible ideas for reining it in further.

Healthcare is a problem. But it’s not an insurmountable one. If we could stop wasting time on fiscal cliffs and debt ceiling hysteria and all the other nonsense that consumes us at the moment, there really are things we could do about this. Our future is not the budgetary nightmare that conservatives keep trying to make it out to be.

UPDATE: Actually, it turns out that this projection does assume that IPAB is implemented. It also assumes some fairly substantial cost savings from increased productivity in the healthcare sector. That may be overly optimistic. Austin Frakt has more here.