From the Federal Reserve, announcing a bigger, bolder bid to use the expectations channel to manage monetary policy:

In particular, the Committee decided to keep the target range for the federal funds rate at 0 to 1/4 percent and currently anticipates that this exceptionally low range for the federal funds rate will be appropriate at least as long as the unemployment rate remains above 6-1/2 percent, inflation between one and two years ahead is projected to be no more than a half percentage point 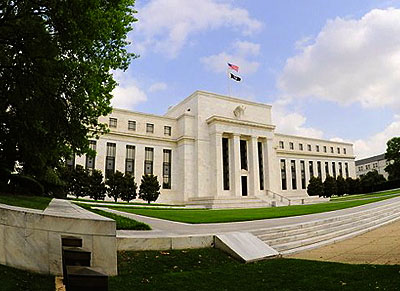 above the Committee’s 2 percent longer-run goal, and longer-term inflation expectations continue to be well anchored.

This is a considerable surprise. Instead of merely confirming that they’re still committed to their previously announced quantitative easing program (QE3) and that low interest rates are “likely to be warranted” through 2015, the Fed has gone much further. They’ve now announced specific goals: interest rates will stay low at least until unemployment gets below 6.5 percent, and they’re willing to tolerate inflation of 2.5 percent along the way.

This may seem like small potatoes. Unemployment will probably drop below 6.5 percent by 2015 anyway, and inflation of 2.5 percent is only slightly above the current target.  But in this case, it really is the thought that counts. A specific employment target is brand new, and a willingness to tolerate higher inflation at all is brand new.

This is big news. I expect conservative outrage (“debasing the currency,” “hyperinflation right around the corner,” etc.) to be in full swing by the time I manage to hit the Publish button on this post.

POSTSCRIPT: And why the change? Because the Fed believes the economy continues to show a lot of weakness. “The Committee remains concerned that, without sufficient policy accommodation, economic growth might not be strong enough to generate sustained improvement in labor market conditions. Furthermore, strains in global financial markets continue to pose significant downside risks to the economic outlook. The Committee also anticipates that inflation over the medium term likely would run at or below its 2 percent objective.”