Over at the Atlantic, Matthew O’Brien canvasses the blogosphere’s chart lovers to compile a list of the 34 best economic charts of the year. It’s worth a look at the whole list, but the chart I want to highlight is from Conor Sen. Here it is: 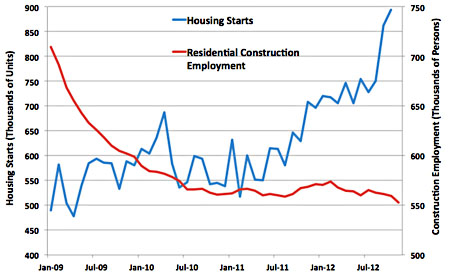 That’s damn peculiar, isn’t it? How is it that housing starts can increase steeply starting in 2011 but construction employment continues to decline? That’s the kind of thing that happens when you build a factory where robots do all the work that people used to do, but nothing like that has happened in the construction industry. Houses today are built pretty much the same way they were a decade ago: with human hands.

So what’s going on? A few months ago the Fiscal Times asked some construction industry experts about this, and they got three answers. First, the increase in housing starts hasn’t been big enough yet. Second, you have to wait a while for all the “finishers” (painters, paper hangers, tile workers, etc.) to be brought on board. Third, most of the work is in apartment buildings, which require fewer workers per unit than houses.

Answer #1 doesn’t hold water. Since the beginning of last year, housing starts have nearly doubled. That’s a lot. Answer #2 is similarly unsatisfying. Housing starts began their upward climb more than 18 months ago. That’s plenty of time to get to the finishing work. So how about Answer #3? Here’s a chart that breaks apart single-unit and multi-unit starts: 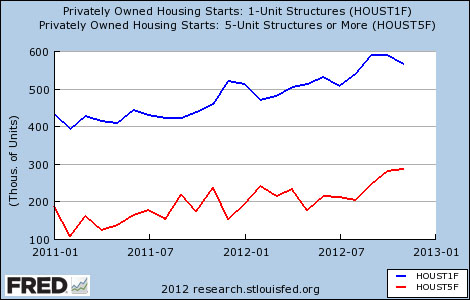 So what’s the answer? My guess is that it’s a statistical artifact of some kind. Something isn’t being counted right here. It’s possible that the construction industry has gotten more efficient in certain ways, but it hasn’t gotten that much more efficient. If housing starts have doubled, then one way or another, construction employment must be up too.

POSTSCRIPT: Anyway, O’Brien missed the real chart of the year. Here it is.