Matt Yglesias is unimpressed with Dick Durbin’s proposal for a new commission to insure the long-term solvency of Social Security:

If people want to waste their time on this, I don’t have a huge objection to the idea of somewhat higher taxes and somewhat skimpier benefits, but I think it’s pretty silly. Recall that 75 years ago was 1937. Any minute spent in 1937 worrying about actuarial projections about 2012 as opposed to, say, Adolf Hitler or the Great Depression would have been a minute wasted.

….The deal worth trying to make on Social Security would be a deal that found a way to take the program outside the somewhat fantastical realm of trust fund accounting. Assessing the “affordability” of a social insurance scheme in terms of the state of its associated accounting instruments rather than the capacity of the economy to carry the load is very misleading. The actually policy question at any given time is what share of national resources should go to raising the living standards of the elderly.

I don’t want to make this blog into Social Security Central, especially since I’m not super committed to finding a deal right this second. Still, this deserves some pushback. First, we aren’t talking about a 75-year horizon. The latest projection from the trustees shows the Social Security trust fund running out of money in 2033. That’s only 20 years away, considerably 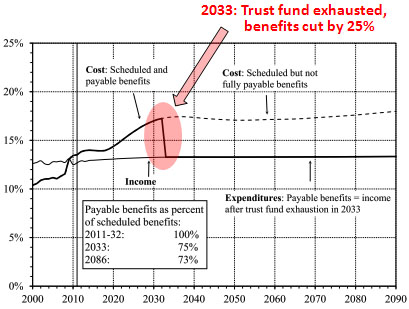 closer than Matt’s own retirement, which I assume he’s already planning for. At that point, Social Security benefits will suddenly drop 25% unless we do something about it.

Now, this projection might be wrong. The Great Recession has done a lot of damage to the trust fund projections, but we won’t be in a recession forever. And these projections have been inaccurate before. However, although these are all arguments I’ve made myself in the past, I no longer believe I was right about them. The truth is that 20 years isn’t a long time, and it’s unlikely that the projections are off by more than a decade at most. This is a problem that’s worth addressing.

Second, getting outside the realm of trust fund accounting is precisely what a deal would be about. Regardless of what you think about the trust fund, it’s only going to last another couple of decades. After that, Social Security will have to be properly financed on a cash basis. This means that tax income in any given year needs to match benefit payments in that year. That’s what this entire issue is about.

So: a Social Security deal would allow the program to operate without the trust fund, and it would keep the program solvent beyond the current trust fund exhaustion date of 2033. It would also probably make it solvent for the rest of the century, but that’s just icing on the cake. This is a problem that’s worth spending time on.