Matthew Dickinson points out that in the postwar era, incumbent presidents who have the chance normally serve two terms:

Why is it so difficult to defeat an incumbent president in the modern era? One likely reason is that the office is much more visible, so that presidents simply by virtue of carrying out their duties in a non-partisan way, such as providing disaster relief, can score political points. It may also be the case that in an era of nuclear weapons and other WMD’s, the presidents’ foreign policy role enhances their political standing. That is, as national security issues loom larger in voters’ calculations, the incumbent president’s foreign policy role is magnified. Moreover, despite the criticisms his comments entailed, Romney was right when noted — albeit perhaps not in the most diplomatic manner — that Presidents are relatively well situated to influence policies in ways that reward key voting blocs. All this is somewhat speculative, of course, but I am 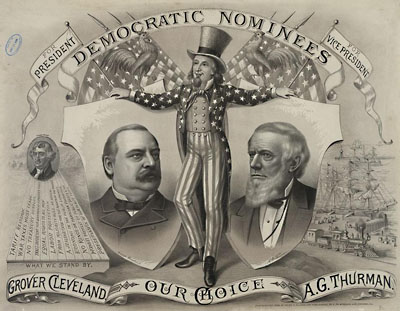 persuaded, in the absence of countervailing evidence, that modern incumbents generally run for reelection with advantages that their premodern forebears did not possess.

I’d push back on this. Ever since our current two-party system congealed after the Civil War, the key to American presidential politics is that parties normally get to serve at least two terms as president. Only after that do they lose. This goes back well before FDR to Harding/Coolidge/Hoover in the 20s, Wilson in the teens, McKinley/TR/Taft, in the aughts, and Grant/Hayes/Garfield/Arthur in the 1870s. Aside from Jimmy Carter, the only exception to this rule in the past 140 years has been the oddball Cleveland/Harrison/Cleveland years.

So there’s nothing especially modern about this. Generally speaking, Americans are willing to give political parties two terms in the White House before they kick them out. Sometimes more. But almost never less than two.