What would be the best thing to do with the Bush tax cuts? Letting them expire on December 31 is a bad idea because the economy is still in fragile shape and a big tax increase would probably send the U.S. back into recession. Extending them permanently is a bad idea because we need to raise more revenue in the future and reduce the medium-term deficit. Letting only the high-end tax cuts expire is OK, but it’s not 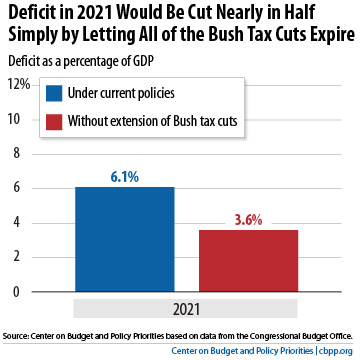 optimal either. It doesn’t raise enough money in the long term and it feeds the fiction that middle-class taxes will never have to go up.

The best option is to let everything expire, and then pass a new tax cut that phases out over time. The new tax cut might be a reduction in rates equal to the Bush tax cuts, or it might be some other set of reductions. It doesn’t matter very much. What does matter is that one-quarter of the cuts should expire in 2014, another quarter in 2015, another in 2016, and another in 2017. This would have a gradual effect on the economy, it would require no further congressional action, it would improve our medium-term deficit problem, it would take effect primarily while the economy is recovering, and it would do no more than eventually return us to the tax levels of the Clinton era. There are more complicated approaches you could think of—tagging the expiration dates to economic benchmarks, for example—but in this case, simpler is better. Just phase out the cut over four years and be done with it. That’s easy for people to plan for.

So that’s the situation we’re in. The best solution is probably the least likely to be enacted. Welcome to Washington.