Yesterday I wrote a post that described the effect of letting the Bush tax cuts on the rich expire. Thanks to the fact that rates would only increase on income over $241,000, it turns out that the effect on anyone earning $1 million or less is pretty modest:

Several commenters pointed out that this table only applies to ordinary income, and that’s true. The Bush tax cuts also lowered rates on capital gains and dividends, and Obama would let those go back up on high earners. In addition, Obamacare includes a 3.8 percent surcharge on investment income over $250,000. All of this adds to the tax bill for the wealthy, but it doesn’t change the basic issue here: moving up from one bracket to another would still only affect income above that bracket. And tax rates on capital gains, which are mostly utilized by the rich, would still be well under the rates for ordinary income. As usual, TPC has all the details if you want to dig into this further.

Beyond that, there’s a fair amount of additional complexity for upper middle-class earners up to about $200,000 or so, thanks to a wide array of tax credits and deductions that phase out at various income levels. Megan McArdle provides the chart below, which shows some of the most common ones. The red lines indicate where the phaseouts are complete: 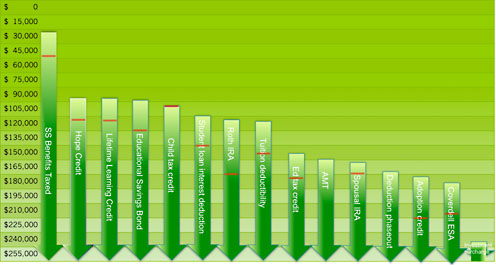 None of this really affects our discussion of people with incomes over $250,000, but it does illustrate the fact that moving across a phaseout line can sometimes have a significant effect on your taxes:

For example, a married couple filing jointly in 2013 with two kids at home and one in college who go from making $100,000 to $125,000 loses a $2,000 child tax credit and $1800 worth of HOPE credit, an increase of almost 4% in their effective—not marginal—tax rate. The marginal tax rate on their extra earnings is 15.2% just from deduction losses; that comes on top of the 28% they’ll be paying the federal government in income taxes, and whatever state income tax they owe.

I don’t have any real point to make here. I just wanted to acknowledge that my income tax chart only showed one piece of the picture. It’s the most important piece for most people who earn under $1 million (above that, investment taxes tend to become more important), but there are still plenty of little gotchas in the tax code that can have funny effects as they phase in and out.