Glenn Greenwald recounts the story today of Saadiq Long, an Air Force veteran currently living in Qatar, a close U.S. ally. His mother in Oklahoma is sick, but when Long bought a ticket to visit her, he discovered that he had been put on the no-fly list:

Long has now spent the last six months trying to find out why he was placed on this list and what he can do to get off of it. He has had no success, unable to obtain even the most basic information about what caused his own government to deprive him of this right to travel.

He has no idea when he was put on this list, who decided to put him on it, or the reasons for his inclusion. He has never been convicted of any crime, never been indicted or charged with a crime, and until he was less than 24 hours away from boarding that KLM flight back to 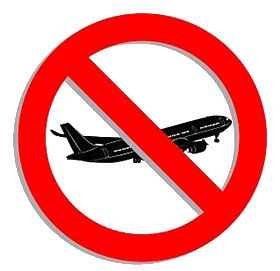 his childhood home, had received no notice that his own government prohibited him from flying.

Is there a good reason that Long is on the no-fly list? I have no idea. There might be. But what’s outrageous about this, aside from the sheer number of people we’ve placed on the no-fly list over the past decade, is the lack of judicial oversight. Someone has put you on the list, but you don’t know who. There’s presumably a reason for being put on the list, but no one will tell you what it is. There’s a procedure that provides you with a “redress control number,” but it often appears to be meaningless. If you go to court, a judge will tell you it’s a national security issue and there’s nothing to be done about it. It’s a cliche to call this kind of system Kafkaesque, but what other word is there for it?

And as Glenn reports, things were bad under Bush, but have gotten worse over the past four years. “Secret deprivation of core rights, no recourse, no due process, no right even to learn what has been done to you despite zero evidence of wrongdoing: that is the life of many American Muslims in the post-9/11 world. Most significantly, it gets progressively worse, not better, as the temporal distance from 9/11 grows.”

Again: maybe there’s a good reason that Long is on the no-fly list. But if there is, the government should be required to stand up in court and make its case, and Long should have the chance to fight back. The executive branch should never have the power to do something like this with no oversight and no accountability.