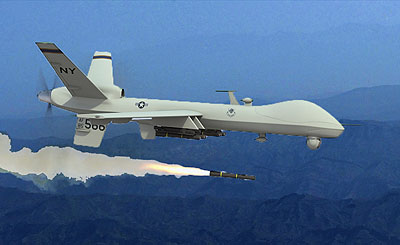 Robert Wright, in an obvious effort to use Petraeusgate to draw attention to a boring subject that has nothing to do with sex, says the real scandal here isn’t Petraeus leaving the CIA, it’s the fact that he arrived there in the first place:

When, in the fall of 2011, David Petraeus moved from commanding the Afghanistan war effort to commanding the CIA, it was a disturbingly natural transition. I say “natural” because the CIA conducts drone strikes in the Afghanistan-Pakistan region and is involved in other military operations there, so Petraeus, in his new role, was continuing to fight the Afghanistan war. I say “disturbingly” because this overlap of Pentagon and CIA missions is the result of a creeping militarization of the CIA that may be undermining America’s national security.

The militarization of the CIA raises various questions. For example, if the CIA is psychologically invested in a particular form of warfare—and derives part of its budget from that kind of warfare—can it be trusted to impartially assess the consequences, both positive and negative, direct and indirect?

And then there’s the transparency question. [A piece in the Washington Post] noted concerns among some activists that “the CIA now functions as a military force beyond the accountability that the United States has historically demanded of its armed services. The CIA doesn’t officially acknowledge the drone program, let alone provide public explanation about who shoots and who dies, and by what rules.” Indeed, only a few months ago, in compliance with the War Powers Resolution, the Obama administration reported (vaguely) on targeted killings in Somalia and Yemen that had been conducted by the military, but not on those conducted by the CIA.

….The circumstances of Petraeus’s departure from the CIA are a little alarming; you’d rather your chief spy not be reckless. But the circumstances of his arrival at the CIA a year ago were more troubling. Yet no alarm was sounded that was anywhere near as loud as the hubbub surrounding Petraeus now. That’s scandalous.

As near as I can tell, drone warfare was largely handed over to the CIA precisely in order to avoid normal military accountability. That really is scandalous, but it attracted only fleeting notice. It’s probably too much to hope that the Petraeus scandal will cause anyone to rethink this, but rethink it we should. Wright has more at the link.