The deficit hounds at the Pete Peterson foundation asked a bunch of think tanks to come up with their own deficit plans, and the results are sort of interesting at a 100,000 foot level. Here are their projected spending levels 25 years from now: 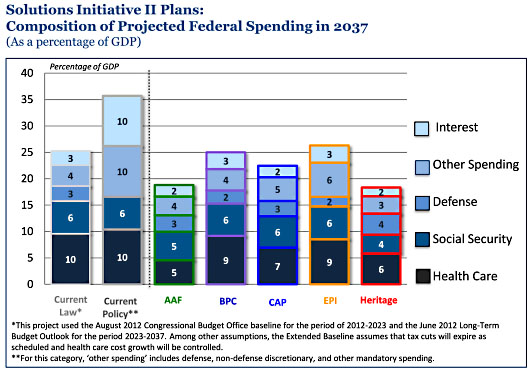 Of the right-wing think tanks, the Heritage Foundation is in fantasyland. They want to reduce spending to 18 percent of GDP, which is just flatly not going to happen. Social Security will not be cut by a fifth from current levels, and domestic spending will not go down to 3 percent of GDP. They’re clearly not even bothering to put forth a reality-based proposal.

AAF is slightly better at 19 percent of GDP, and they have an interesting VAT-like tax proposal that actually has the potential to increase economic growth and produce more revenue than our current system. And although they cut Social Security spending compared to promised future levels, at least they don’t pretend that we can actually cut it from current levels.

Of the lefty think tanks, BPC and EPI are too aggressive for my taste. I don’t think there’s any question that federal spending is going to increase over its historic levels (typically around 19-20 percent of GDP) by 2037. Healthcare costs are going to keep rising even if we do a great job of controlling them, and we have to face up to that. Nonetheless, I’d like to at least have a goal of keeping spending in the low 20s.

So sign me up for CAP’s vision. Their plan includes some small cuts in future benefit growth for Social Security, domestic spending at a more achievable 5 percent of GDP, and healthcare at 7 percent of GDP. That last will be tough to meet, but it’s a worthwhile goal. And their overall spending target is a bit under 23 percent of GDP. That strikes me as about right. It’s reality-based, but still makes a serious effort to keep spending under control.

There are more details at the link, but sometimes it’s worthwhile to get a big-picture view of what everyone is proposing. This is a useful chart in that regard.