So how’s the federal deficit doing? Last month the Treasury Department figured that the FY2012 deficit would clock in at about $1.1 trillion, or 7 percent of GDP. That’s down considerably from three years ago, when the deficit peaked at a hair over 10 percent of GDP.

Jed Graham, using the three-year change as a benchmark, says this is the biggest peacetime drop in 75 years:

Believe it or not, the federal deficit has fallen faster over the past three years than it has in any such stretch since demobilization from World War II….If U.S. history offers any guide, we are already testing the 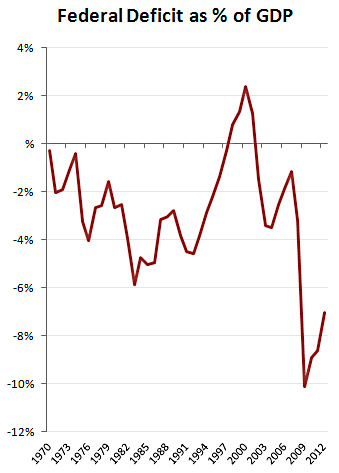 speed limits of a fiscal consolidation that doesn’t risk backfiring. That’s why the best way to address the fiscal cliff likely is to postpone it.

….Other occasions when the federal deficit contracted by much more than 1 percentage point a year have coincided with recession. Some examples include 1937, 1960 and 1969.

This three-year window feels a little like cherry-picking to me. I’m not sure it has any special value aside from the fact that it happens to give us a comparison with the peak deficit year of 2009, therefore making this year’s decline look especially steep. Still, there’s no question that no matter what window you look at, the deficit is shrinking at a pretty rapid pace, as the chart on the right shows. And Graham is right: this means that the government “already has its foot on the brakes” at a time when our recovery from the Great Recession is still pretty fragile. Braking even harder isn’t a great idea right now.