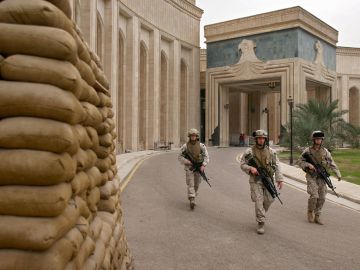 Dan Drezner laments the increasing tendency for American diplomats in dangerous places to be cut off from the residents of their host countries. And he’s afraid that the death of Ambassador Chris Stevens in Benghazi is just going to make it worse:

If U.S. diplomats have to do the bulk of their work behind fortresses, then pretty soon there will be no difference between their worldview and those of the four-star generals….Rather than the simple mantra of “never again” when reacting to the death of Ambassador Stevens, the life and mission he desired should be valorized a bit more. Stevens knew that the best way to advance U.S. interests in Libya was to be on the ground. Doing that from embassies that resemble Orwell’s Ministry of Truth is a difficult task.

There is a tradeoff between protecting U.S. officials overseas and promoting their ability to advance the national interest. I fear the pendulum has swung way too far towards the protection side, and Stevens’ death will only exacerbate that shift. The cruel irony is that Stevens, of all people, would have abhorred that shift. Better that we openly acknowledge the risk that foreign service officers face in overseas postings, recognize the bravery and loyalty that their service entails, and let them do their f***king jobs.

Roger that. And although not too many people want to reopen this conversation, it’s still worth asking some hard questions about why we need these fortress embassies in the first place. The answer, obviously, is that a helluva lot of people, especially in the Middle East, hate us. Why? Well, just in the past couple of decades we’ve launched military operations against Afghanistan, Iraq, Pakistan, Yemen, Somalia, and Libya—just to name the half-dozen most direct and overt cases. Sure, it’s possible that residents of the Middle East don’t really care much about this, but hate us for our freedoms instead, but what are the odds?