New York mayor Michael Bloomberg has gotten a lot of abuse for his campaign to ban the sale of sugary drinks in cups larger than 16 ounces. There are lots of reasons for this, but among the economically literate his proposal is widely viewed as gratuitously inefficient. Simply taxing sugary sodas would be a lot more sensible, so why not do that instead?

Well, here’s what’s happening in Southern California, where the city of El Monte has placed an initiative on the November ballot to tax sugary drinks. El Monte has a high rate of obesity and big fiscal problems, so it seemed like a winner:

But then the beverage industry converged on El Monte, turning the race into the most expensive campaign in the city’s history — and giving it an increasingly David-versus-Goliath feel.

The beverage industry forces are open about their desire to not just kill El Monte’s proposal but to make the sugary drinks tax politically unfeasible to other cities. They’ve brought together consultants from across the country, including the firm of a Washington, D.C., political strategist whose famous “Harry 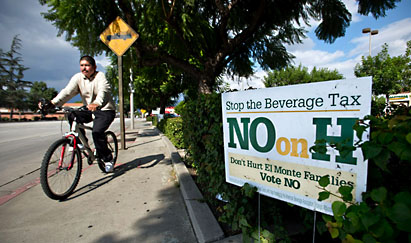 The same thing happened in New York, of course, where the 16-ounce rule came only after attempts to levy a tax failed. And it explains a lot of other suboptimal policies too. Why do we have CAFE fuel economy standards for cars, for example? Part of the reason is that a more sensible policy — a carbon tax or a cap-and-trade plan — is politically impossible thanks to the anti-tax jihadists in Washington. So instead we implement a hodgepodge of command-and-control rules that don’t fall foul of Grover Norquist’s blood pledge and which the public accepts because it has no idea that these rules end up costing them more than a simple tax would.

In other words, complicated, hidden costs are always better than simple, open costs. That’s always been the case to a certain extent, but it’s become practically a truism over the past couple of decades. Thanks to conservatives, it’s all but impossible to pass a simple, effective policy these days. So instead we get a morass of obscure, convoluted rules that barely get the job done and have a bunch of terrible side effects.

And then conservatives complain about how oppressive all our rules are. Pretty nice work if you can get it.