I might blog this in more detail later, but for now I’ll just do something quick. I’m now the proud owner of an Android Tablet, an Asus Transformer Infinity, and overall it’s a pretty nice device. But I’ve sure had trouble finding a decent browser for it. The basic problem, as near as 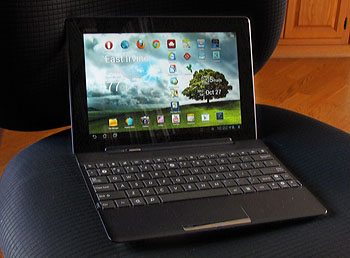 I can tell, is that Android browsers are all designed for phones, and haven’t really been rewritten to make sense on a device with more screen real estate. Presumably this will get fixed over time. Beyond that, though, the performance is pretty sucky on all of them.

I didn’t even try it at first, because even the desktop version doesn’t work with MoJo’s back end. But finally I gave it a whirl, and it turns out to be 100% compatible with our blogging software. Hooray! Their bookmark system is a little wiggy, but also OK. Double hooray! But performance. Oh my. I swear, the rendering engine looks like it was written by a five-year-old. It’s slow and jerky on most sites, really slow and jerky on other sites, and so bad that it renders other sites all but unusable. (Including, ironically, Google Groups.)

In fact, the performance is so laughably bad that I half wonder if it’s somehow my fault. I can’t figure out how, though. I’m running the latest version of Android, the latest version of Chrome, the performance setting is on High, the Tegra 3 processor on the Asus is supposed to be pretty fast, and as far as I know, there are no background tasks running that could slow it down.

Anyone else have this problem? Am I imagining things? This just seems really weird. Aside from this, feel free to consider this an open thread on Android, tablets, and computing in general. (Keep in mind, however, that I already own an iPad, so telling me to get a Mac really won’t do much good.)