Paul Waldman has some advice for President Obama in tomorrow’s debate:

I realize there’s at least some chance that the President is too busy to be reading this blog today. But just in case, let me offer a suggestion. What Obama needs is a set of responses that cover the topic at hand, but that all follow a single theme. He needs, to put it bluntly, a single phrase that he will repeat every time he’s refuting a Romney falsehood. It could be something slogan-y, like “That’s another Romney 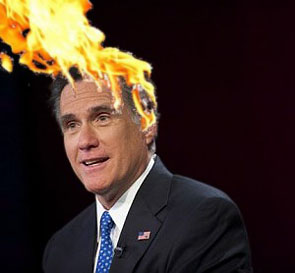 Reinvention,” or could be something simple, like “Once again, Governor Romney thinks he can fool you and get away with it.”….When Romney lies, what Obama needs viewers to take away from the exchange isn’t that there’s some dispute about the details of policy, but that Romney is lying.

Sadly, I’m pretty sure Paul is wrong about this. Partly this is because most viewers don’t react well to charges of lying. They think it makes the accuser sound distinctly unpresidential. Partly it’s because it’s not easy to make charges of lying stick. Romney would simply reply with a blizzard of numbers and “studies” that would muddy the waters enough to blunt the attack. Mostly, though, it’s because most voters don’t care if politicians lie. That includes you.

You should think of presidential campaigns as aspirational, not operational. Voters know perfectly well that presidents don’t accomplish most of what they say they will. So, reasonably enough, they don’t care much about the details. What they do care about is what candidates believe. In Romney’s case, his message is fairly simple. He believes in low taxes; less spending on lazy slackers; social conservatism; getting tough on our enemies overseas; and unleashing the power of business by cutting regulations. And he really does believe all this stuff. He may be evasive or even downright dishonest about the details of his tax cuts or how he’d get tough with Syria and Iran, but most people don’t really care. It’s enough to know that he really does want to cut taxes and he really does want to get tough with Syria and Iran.

And before you get all huffy about how stupid voters are, keep in mind that this all applies to you too. Most of my readers are liberals. You’re planning to vote for Obama. So ask yourself: how much do you care that Obama is sometimes a little less than perfectly accurate about his plans? Not much at all, I’d guess. You either convince yourself that his exaggerations are small ones, or that he’s been forced into it by Romney’s serial lying, or that if you dig deep enough there are ways of justifying everything he says. In other words, what matters aren’t all the arid details. What matters is that Obama believes most of the same things you believe.

Obama can probably help himself tomorrow by demonstrating how slippery Romney is. But that’s not his main job. His main job is to hammer home the flip side of all of Romney’s beliefs: he wants to cut taxes on the rich; he wants to slash Medicare and Medicaid; he wants to ban abortion; he wants to start a war with Iran; and he wants to help out all his old pals on Wall Street who ripped us off so badly during the aughts. So forget the details. It’s a dead end. Voters just need to be given reasons to think that they don’t like what Romney believes in.

And if that means that Obama needs to engage in a few wee exaggerations of his own? I’ll bet most liberals won’t mind very much.