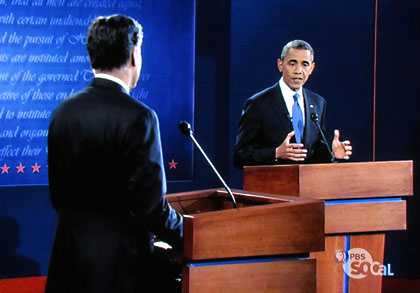 Last night’s debate will end up getting parsed endlessly today, and President Obama is obviously the consensus loser already. I didn’t quite see it that way. Obama was indeed halting and unfocused, which made him appear oddly unprepared, but I thought Romney’s speaking style featured some equally unattractive qualities, ones we’ve seen in prior debates: he was nervously aggressive, spouted faux outrage over every single claim about his plans, repeatedly demanded more time to respond, and just generally oozed a sort of ADHD quality. Apparently, though, this bothers me more than most people.

But Obama’s lack of focus bothered me too. For example, on three different occasions he claimed that Romney wanted to cut taxes by $5 trillion, and three times Romney said that was wrong:

Governor Romney’s proposal that he has been promoting for 18 months calls for a $5 trillion tax cut….

If you believe that we can cut taxes by $5 trillion….

Let me repeat what I said. I’m not in favor of a $5 trillion tax cut. That’s not my plan….

This is puzzling. The obvious gimmick here is to repeatedly refer to Romney’s plan as a $5 trillion tax cut, which is sort of brazenly incorrect, as a way of baiting Romney into claiming that he’s going to close loopholes and deductions that will make his plan revenue neutral. And it worked! That’s exactly what Romney did.

This is a pretty good trap. After getting Romney to talk about deductions and loopholes on three separate occasions, it’s the perfect time to make a withering comment about pigs in a poke and demand that he come clean. Is he going to do away with the home mortgage deduction? The charitable deduction? The healthcare deduction?  Come on, Governor Romney, level with us. No more snow jobs. Let’s hear your real plan, not a bunch of supply-side happy talk.

It was perfect! Except that Obama never sprung the trap. Oh, he talked about “the math,” and about the “analysts” who say Romney’s plan doesn’t add up, and later on even got off a quip about Romney’s “secret plans.” But he never even tried to seriously hammer Romney on the point he was obviously setting up: What are the deductions you’re targeting? No more hiding. No more secrets. Tell us the other half of your plan.

This, to me, was the most peculiar single aspect of the debate. It seemed obvious that this was the road Obama was trying to lead Romney down, and it worked. But then he failed to follow up with the killing blow. Why?