Today, Slate takes on two of my pet peeves. First, Farhad Manjoo on the pagination of online stories:

Pagination is one of the worst design and usability sins on the Web, the kind of obvious no-no that should have gone out with blinky text, dancing cat animations, and autoplaying music. It shows constant, quiet contempt for people who should be any news site’s highest priority—folks who want to read articles all the way to the end.

Pagination persists because splitting a single-page article into two pages can, in theory, yield twice as many opportunities to display ads—though in practice it doesn’t because lots of readers never bother to click past the first page. The practice has become so ubiquitous that it’s numbed many publications and 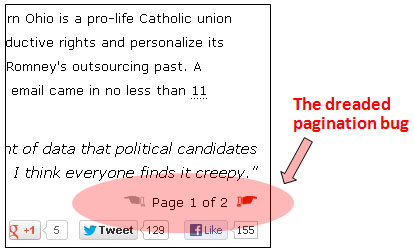 readers into thinking that multipage design is how the Web has always been, and how it should be.

Manjoo talks about some of the problems with pagination, and as you’d expect, they’re not exactly world-shaking. So I’ll add one to the pot. Someone I know, who will remain nameless, spent years reading LA Times articles on the web and not realizing that the wording at the bottom indicated that there was a second page of text. He did think it was odd that so many stories ended rather abruptly, and also odd that the online edition sometimes didn’t always carry the full text that was in the print edition. But until I mentioned it one day, he never made the connection between this and the mysterious “Next” that often showed up at the end of online pieces. This could be solved by either stopping the use of pagination or else using a more descriptive word to tell people that there’s more if they click a link. Naturally I’d prefer the former.

Mother Jones paginates its articles too, of course. Everyone does. The panjandrums at MoJo galactic headquarters have, however, been very good about humoring my unwillingness to paginate long posts on my own blog just because I hate it so much. Death to pagination! (By the way: I do my part by always linking to the single-page version of stories whenever I can. You’re welcome.)

Pet peeve #2 comes from Daniel Engber, and it’s about the endless, smug overuse of “correlation is not causation” as an exasperated conversation ender:

The correlation phrase has become so common and so irritating that a minor backlash has now ensued against the rhetoric if not the concept. No, correlation does not imply causation, but it sure as hell provides a hint. Does email make a man depressed? Does sadness make a man send email? Or is something else again to blame for both? A correlation can’t tell one from the other; in that sense it’s inadequate. Still, if it can frame the question, then our observation sets us down the path toward thinking through the workings of reality, so we might learn new ways to tweak them. It helps us go from seeing things to changing them.

I get where this comes from. Too many people really do see correlations and just assume that they imply causation of some kind. So it became common to warn people away from this. But honestly, it’s gotten so out of hand that I sometimes think we now have the opposite problem: too many people think that correlations are entirely meaningless. But as Engber says, they aren’t. At the very least, they provide clues and don’t deserve to be immediately dismissed as meaningless.

At the very least, I’d offer the following challenge: You’re not allowed to airily dismiss correlations in research studies unless you actually read the study and understand what controls the researchers used to check for causation. Was there a dose-response effect? Did they do a good job of controlling for confounding factors? Did they discuss possible mechanisms for causation? Etc. If it turns out that the researchers didn’t even bother addressing the question, then feel free to mock them. If they did, then address their evidence.

And if it’s not a research paper, but just a blogger tossing up a pair of lines on a graph? Same deal: at the very least, you should propose some alternative explanation, or provide some reason for doubt. It doesn’t need to be bulletproof, but it ought to be something. Let’s raise the bar a bit here.