What’s going on? Our working assumption should be twofold: (a) the Romney campaign has plenty of money, and (b) they aren’t idiots. So what’s the deal? I’ve been meaning to mention something about this, but today Seth 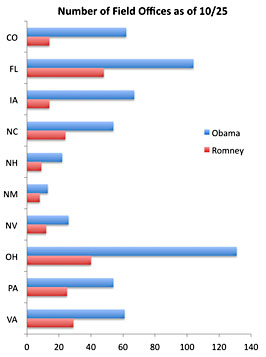 Masket does it for me. He makes three suggestions, and I suspect the third one is probably correct:

He’s counting on field organizational efforts from the parties, church organizations, and other allied groups to do the same sort of things that the Obama offices are doing.

There’s been a disconnect in the ground games of the major parties for some time. Democrats tend to rely on paid, professional operations, while Republicans rely more on volunteer efforts, largely from evangelical churches. This is something that actually works in the Republicans’ favor, since volunteer efforts from friends and neighbors tend to be more effective at switching votes than professional phone banks. (Also cheaper.) On the other hand, the professional organizations are often more thorough, and are better at the actual logistics of getting people to the polls.

In any case, I wouldn’t be surprised if that’s what’s happening here. This is just a difference in the way the parties handle elections these days, not necessarily an indication that the Obama organization is kicking Romney’s ass.