President Obama’s new booklet, “A Plan for Jobs,” is subtitled “The New Economic Patriotism,” and the editors of National Review are not amused. I’ll admit that I could do without that subtitle myself, but it turns out that NR objects to it mainly because of its initials: “If that name seems to you redolent of early-20th-century totalitarians, that may be because it is not the first N.E.P.: Lenin’s was the Novaya Ekonomicheskaya Politika.” You’d think that National Review, of all places, would know its 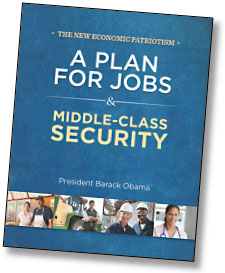 communist history, but no. Matt Steinglass provides the free lesson:

Interesting reference! The Novaya Ekonomich-eskaya Politika was a free-market economic reform package introduced by the Soviet government in 1921. It entailed a retreat from an all-state economic model in favour of institutionalised recognition of a legitimate private sector in industry and agriculture, as well as a dramatic tax cut.

….The reforms were largely successful, leading the Russian economy back to pre-war production levels by 1927. But they also led to rising income inequality. After Stalin won the struggle for power in 1928 over alternative leaders like Trotsky, Zinoviev and Kamenev, he soon abandoned the NEP in favour of forced agricultural collectivisation and industrial centralisation under the first five-year plan. He then gradually mopped up every remaining base of political opposition within the party and had them all executed in show trials beginning in 1934.

I’ll grant you that an association with Lenin does no politician any good, regardless of which particular policy we’re talking about. Still, if you’re going to be childish enough to object to something because of its initials, you probably ought to at least know what you’re talking about first.