I’m just full of charts today. Sorry about that. But Paul Krugman has a pretty interesting one this morning from the latest IMF World Economic Outlook. Here’s the background: the IMF report shows that countries which implemented big budget-cutting austerity measures have done worse than countries that didn’t. That part is easy. But it doesn’t prove 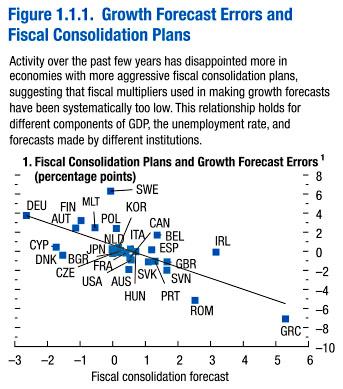 anything. Countries that are in bad trouble are probably the ones that had to cut back the most in the first place. So it’s not necessarily austerity that’s causing their problems.

So the IMF boffins took a look at forecasts instead. After all, forecasters already know which countries are in the biggest trouble and make their predictions after taking that into account. But guess what? It turns out that their forecasts were more wrong for countries that implemented severe austerity programs. And they were wrong by a lot:

We find the coefficient on planned fiscal consolidation to be large, negative, and significant….Overall, depending on the forecast source and the specification, our estimation results for the unexpected output loss associated with a 1 percent of GDP fiscal consolidation are in the range of 0.4 to 1.2 percentage points.

So forecasters, knowing that, say, Greece was in trouble, predicted a slowdown in growth. But the austerity program forced on the Greeks slowed them down even more. Conversely, countries like Germany, that expanded their budgets, did better than expected. Roughly speaking, it turns out that you get an output loss of 1% for every 1% of austerity.

This is a clever bit of data analysis, though it shouldn’t come as a surprise to anyone. Austerity simply isn’t the answer to a severe economic downturn. It just makes things even worse than you thought they’d be.