The war along the Turkish border is heating up:

With Syria’s civil strife coursing through major cities and unsettling neighboring countries, the Turkish military sounded a somber warning on Wednesday that it may respond more forcefully after days of shelling from Syria….The exchange of fire has raised concerns that the conflict will ignite a broader crisis in the region. On 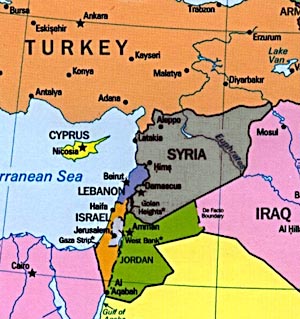 Tuesday, the NATO secretary general, Anders Fogh Rasmussen, emphasized that NATO, of which Turkey is a member and which considers an attack on one member to be an attack on all, had “all necessary plans in place to protect and defend Turkey if necessary.”

Meanwhile, the U.S. ground presence in the region is ramping up:

The United States military has secretly sent a task force of more than 150 planners and other specialists to Jordan to help the armed forces there handle a flood of Syrian refugees, prepare for the possibility that Syria will lose control of its chemical weapons and be positioned should the turmoil in Syria expand into a wider conflict.

….Officials said the idea of establishing a buffer zone between Syria and Jordan — which would be enforced by Jordanian forces on the Syrian side of the border and supported politically and perhaps logistically by the United States — had been discussed. But at this point the buffer is only a contingency.

Over at the Atlantic, Robert Wright explains why full-scale war between Turkey and Syria is a genuine possibility. It’s sort of a cross between Vietnam and World War I. Stay tuned.