WRAP-UP: This was an odd, off-kilter debate. Neither Romney nor Obama seemed entirely comfortable. Romney struck me as too hyper, insisting in every segment on going over every single claim Obama had just made. The result was a bunch of laundry lists that never cohered into recognizable points. Obama seemed oddly hesitant and halting, as if he wasn’t quite sure what points he wanted to make. Transcript here.

Neither candidate landed any serious blows. Obama came the closest, I thought, in the last half hour when he attacked Romney for all his secret plans. After noting that Romney wouldn’t tell us which tax deductions he wants to cut, or how he wants to replace either Obamacare or Dodd-Frank, Obama delivered the best line of the night: “Is the reason that Governor 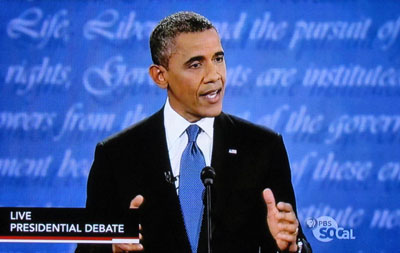 Romney is keeping all these plans secret because they’re too good? Is it because somehow middle-class families are going to benefit too much from them?”

Did that make up for the fact that Obama was strangely incompetent at attacking Romney on his tax plan in the first half hour? Hard to say. But honestly, going after Romney on the tax deduction front seems pretty obvious, and I don’t understand why Obama never really did it. Sure, he made a crack about “the math,” but he didn’t come straight out and ask Romney if he planned to get rid of the home mortgage deduction, for example. That would have hit home a lot harder than hauling out a wonkish point about the “independent analysts” who say Romney’s plan doesn’t add up.

Romney avoided any big mistakes, and certainly projected more energy than Obama. But I didn’t think he really delivered any great lines, or got off any really crisp explanations of his policies. I don’t think tonight’s performance will hurt him, but I doubt that it really helps him either.

Forget all that newfangled Twitter nonsense. We’re going retro with some old school liveblogging of tonight’s debate between Barack Obama and Mitt Romney. Let’s do it.

10:23 – Romney is seriously rambling on education.

10:22 – Obama keeps pulling back when he’s obviously about to attack Romney. Not sure why.

10:21 – No zingers so far. A few obviously canned lines, but nothing delivered with any zest.

10:13 – So Lehrer’s approach for every topic is to ask the candidates if they think there are any differences between them? This really isn’t working. It’s just an invitation to give a stump speech.

10:12 – Romney is answering with a bunch of possible options? Weak. Now retreating to talking points.

10:04 – Obama’s IPAB explanation wasn’t bad, but his speech is oddly halting and staccato tonight. He just doesn’t seem fully in command of what he wants to say.

10:01 – “The irony is that we’ve seen this model work really well — in Massachusetts.” Good line.

9:53 – Do most viewers know what Dodd-Frank is? Do they know what leverage limits are?

9:44 – Romney’s attack on the $716 billion that Obama cuts from Medicare was OK, but he should have stuck with it instead of flitting around to whatever other attack popped into his mind.

9:43 – Obama is right that Social Security needs nothing more than modest tweaks.

9:40 – Romney is all over the map trying to respond to every last thing Obama said.

9:38 – “It’s actually an accounting treatment….” That’s really not a good phrase to come out of Romney’s mouth.

9:36 –  So far, neither of these guys has really done a crisp job of explaining their programs.

9:34 – Romney going all in on the dynamic scoring fairy.

9:25 – Romney’s habit of arguing about how much time he has is something he really needs to overcome. Sounds childish.

9:18 – Is this $5 trillion tax cut thing a trap for Romney? Now Obama can ask him to list the loophole disclosures to pay for that $5 trillion.

9:09 – A pair of stump speeches. I’ve forgotten what they said already.