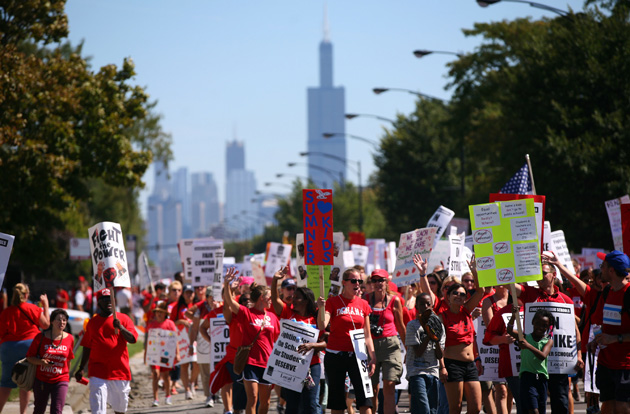 A lot of otherwise liberal people really hate teachers’ unions. I’ve been wondering why they’re so singled out for contempt. It struck me last night that perhaps the thinking is that it’s ok for autoworkers or janitors to unionize because they’re pretty much interchangeable from an educated upper-middle-class perspective. Teachers, though, are supposed to be “professionals,” and any kind of solidarity among them offends an individualistic, meritocratic sensibility that believes in (often “objective”) measures of evaluation.

I really, really doubt this. It’s true that teachers themselves were sometimes reluctant to unionize in the early days for exactly this reason: they didn’t think of themselves as the kind of blue-collar workers who manned a picket line and chanted slogans at their bosses. But I don’t think anyone else gives this a moment’s thought. Matt Yglesias responds to Henwood:

Indeed, what baffles me about these discussions is the tendency of labor’s alleged friends to simply refuse to look this reality in the face and instead insist that any hostility to specific union asks must secretly reflect the skeptic’s hostility to the existence of the union or its members.

As it happens, plenty of Chicagoans, liberal and otherwise, do support the teacher strike. But a lot of others don’t, and I suspect that general antipathy toward teachers unions isn’t hard to explain. First, teachers are viewed as pretty well paid. In the past, teachers were trying to catch up to what similar private sector workers earned, but they’ve mostly accomplished that. Total comp for urban teachers these days is pretty good.

Second, they work 180 days a year. Third, they get pretty good benefits. Fourth, teacher unions are viewed as dead-end opponents of any kind of accountability or reform.

Now, you can argue about all these things. Teachers still aren’t paid as much as a typical college grad. They’re paid less than they are in most other countries. Their benefits aren’t any better than those for most white-collar workers (it’s police and fire fighters who generally get the primo benefit packages). And “reform” can be just a thinly disguised attack on teachers themselves.

Nonetheless, this perception, I suspect, is pretty widespread. Add to that the fact that teacher salaries do indeed come out of taxpayers’ wallets—taxpayers whose incomes haven’t risen in a decade—and that teacher strikes hurt people’s children, and is it any wonder that teachers unions aren’t always especially beloved? I agree with Matt: you don’t really need a lot of armchair psychologizing to figure this out.