Fascinating tidbit of the day: Tax evasion is so widespread and so culturally embedded in Greece that loan officers in banks have standard multipliers they use to convert reported income into real income. If you’re a doctor, for example, they assume your income is 2.45x what you report to the tax man. If you own a restaurant, they multiply by 1.99. If they didn’t 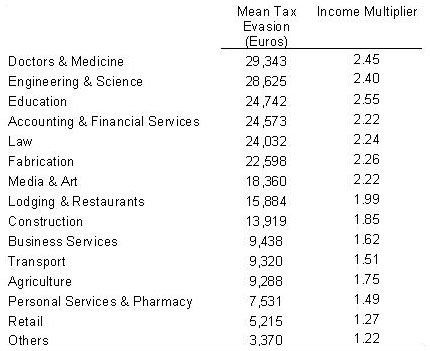 do this, they’d never approve any loans at all because no one would have enough income to qualify.

It just goes to show how people manage to adapt to almost anything. But why the different multipliers for different industries? The Economist summarizes the paper that came up with the multipliers:

One hypothesis is that people in industries which generate a bigger “paper trail”—because they use more intermediate goods as inputs, for example—are at greater risk of being caught and therefore evade tax less. The authors do indeed find that industries that generate lots of traceable information have lower levels of evasion. But they also find another interesting correlation, between the professional backgrounds of Greek parliamentarians and the industries with high levels of tax evasion. Stripping out lawyers, who have a disproportionately nasty habit of becoming politicians, the three most tax-dodging professions account for about half the votes among Greek MPs. That, the authors say, might explain a lack of political willpower on the issue of tax evasion.

Apparently the retail industry in Greece desperately needs to elect more of its own to parliament. A multiplier of 1.27 is pathetic.