Barack Obama’s speech tonight was….OK. But that was about all. It meandered, it skittered, and most of the time it seemed oddly themeless. It had some good lines, but too often they were left hanging. Take this jab at Republicans, for example:

They want your vote, but they don’t want you to know their plan. And that’s because all they have to offer is the same prescription they’ve had for the last thirty years:

“Deficit too high? Try another.”

“Feel a cold coming on? Take two tax cuts, roll back some regulations, and call us in the morning!”

That’s a good riff. But it came early in the speech, and after a couple of pro forma sentences about tax cuts for millionaires (he’s against them) Obama was off on an entirely unrelated riff about common effort, shared responsibility, and bold, persistent experimentation. Then he was off to the car industry. Then energy. Then 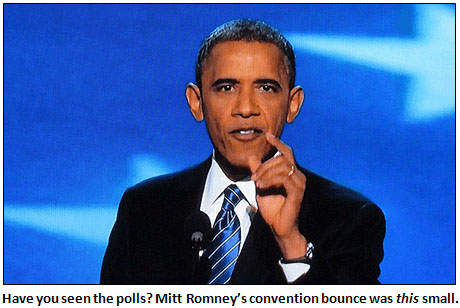 a throwaway line about global warming. And all of these riffs were just that: short collections of platitudes with no real meat behind them and no promise of what a second term might bring. Here’s the best he could do on deficit reduction:

Now, I’m still eager to reach an agreement based on the principles of my bipartisan debt commission [Simpson-Bowles]. No party has a monopoly on wisdom. No democracy works without compromise. I want to get this done, and we can get it done. But when Governor Romney and his friends in Congress tell us we can somehow lower our deficits by spending trillions more on new tax breaks for the wealthy, well, what’d Bill Clinton call it? You do the arithmetic, you do the math.

I refuse to go along with that. And as long as I’m President, I never will. I refuse to ask middle class families to give up their deductions for owning a home or raising their kids just to pay for another millionaire’s tax cut. I refuse to ask students to pay more for college; or kick children out of Head Start programs, to eliminate health insurance for millions of Americans who are poor, and elderly, or disabled, all so those with the most can pay less.

That’s a workmanlike statement. It checks the right boxes. Like the rest of the speech, it got the job done. But I didn’t feel any real passion in the delivery. It felt more like an actor soldiering through his lines.

Overall, it was a decent wrapup. It was a decent defense of his first term. It was a decent appeal for votes. But there was nothing memorable, nothing forward looking, and nothing that drew a contrast with Romney in sharp, gut-level strokes. Obama was, to be charitable, no more than the third best of the Democratic convention’s prime time speakers in 2012.