Gallup is out with a post-convention poll asking people whether last week’s festivities in Tampa have made them more likely or less likely to vote for Mitt Romney. Answer: 40% are more likely, 38% are less likely. This is a net bounce of 2 percentage points, the 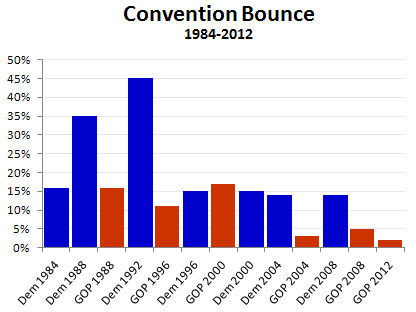 lowest since Gallup started tracking this question a quarter of a century ago.

The chart on the right shows the net bounce for most conventions going back to 1984. What I found most interesting is that aside from two outliers with gigantic bounces, every convention has produced a bounce of about 15 percentage points. Every convention, that is, until you get to Republican conventions in the Bush era and beyond. Ever since W stamped his imprint on the GOP, their convention bounces have been nearly invisible. Apparently, putting themselves on display to the American public simply doesn’t make a positive impression anymore.

Those of us who are liberal hacks will have an obvious reaction: No kidding. Is it any wonder that the American public doesn’t get the warm and fuzzies from watching the parade of rabid true believers that make up today’s GOP? Still, it’s kind of curious, isn’t it?