Some months ago, I worked with political scientists Seth Hill, John Sides and Lynn Vavreck to build a model that used data from every presidential election since 1948 to forecast the outcome of this presidential election. But when the model was done, I thought it was broken: It was forecasting an Obama win even under scenarios of very weak economic growth.

….After a lot of frantic e-mails, my political scientist friends finally convinced me that that’s the point of a model: It forces you to check your expectations at the door. And my expectation that incumbents lose when the economy is weak was not backed up by the data, which suggest that incumbents win 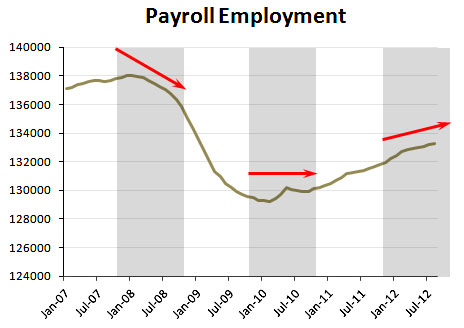 unless major economic indicators are headed in the wrong direction.

Obviously, Obama’s chances are hurt by the fact that unemployment remains high, wages are stagnant, and we still haven’t made up all the job losses from the recession. But politically speaking, the economy isn’t in terrible shape. It’s in OK-but-not-great shape. And that means the incumbent probably has a small advantage. If Obama wins by a couple of percentage points in November, he will have performed almost exactly as well as you’d expect given the state of the economy.