Yesterday I asked whether the results of generic congressional polling were a good predictor of the actual national House vote. I was skeptical because conventional wisdom says that Republicans usually outperform the generic ballot. Today, Sam Wang produces the following historical numbers from Real Clear Politics: 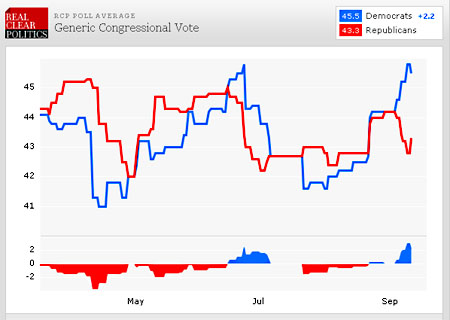 2006, and in fact, Republicans did outperform the generic ballot in 2002-06. However, they’ve underperformed in the two most recent elections. So I need to update my priors.

Second, these results are for the final week of polling. It makes sense that the generic ballot would converge toward the actual national vote a few days before the election. But how about earlier? This is a little quick and dirty, but here are the average generic ballot results for the few days around September 1:

It looks to me that a couple of months out, the generic ballot really does underweight how well Republicans will do. The only exception is 2008, which turned into a Democratic landslide. So I’d probably subtract two or three points from the current RCP generic poll average, which has Democrats ahead by 2.2%. In reality, this probably suggests that Republicans will win the national vote by a point or a bit less, and given their incumbency advantage, that might translate into a one or two-point lead in actual number of seats won.

This is very, very rough. Consider it extremely tentative. I’d be pretty interested in a more rigorous look at this if anyone wants to do it.

UPDATE: Why did I choose September 1? Because I’m an idiot and forgot what month it is. October 1 would have been better, or even September 21 if I wanted to use today’s results. In any case, my interest in a more rigorous analysis stands. Mid or late-September would probably be a better comparison point, though.