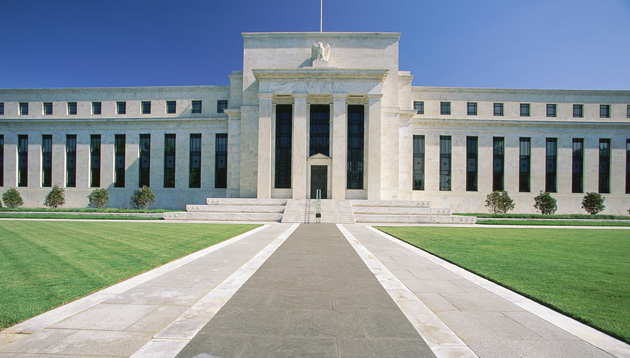 Here’s Mitt Romney responding to a rich donor worried that the United States is heading toward bankruptcy:

Audience member: The debates are gonna be coming, and I hope at the right moment you can turn to President Obama, look at the American people, and say, “If you vote to reelect President Obama, you’re voting to bankrupt the United States.”…

Romney: Yeah, it’s interesting…the former head of Goldman Sachs, John Whitehead, was also the former head of the New York Federal Reserve. And I met with him, and he said as soon as the Fed stops buying all the debt that we’re issuing—which they’ve been doing, the Fed’s buying like three-quarters of the debt that America issues. He said, once that’s over, he said we’re going to have a failed Treasury auction, interest rates are going to have to go up. We’re living in this borrowed fantasy world, where the government keeps on borrowing money. You know, we borrow this extra trillion a year, we wonder who’s loaning us the trillion? The Chinese aren’t loaning us anymore. The Russians aren’t loaning it to us anymore. So who’s giving us the trillion? And the answer is we’re just making it up. The Federal Reserve is just taking it 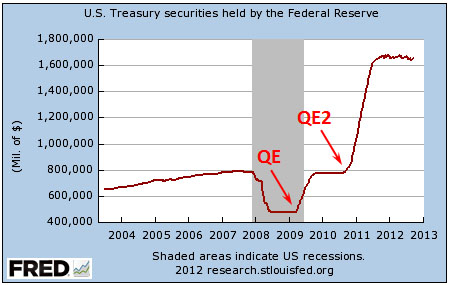 and saying, “Here, we’re giving it.” It’s just made up money, and this does not augur well for our economic future.

Italics mine. So is this true? Is the Fed really buying three-quarters of all Treasury debt?

The short answer is no. The longer answer is that the Fed has engaged in two rounds of quantitative easing and just recently announced a third. The first one, which started at the end of 2008, mostly involved the purchase of mortgage-backed securities. Purchase of Treasury debt was fairly small. The second round, which took place in the first half of 2011, did consist mostly of Treasury debt. It amounted to $600 billion, and led to a spate of horror stories about how the Fed was purchasing 61 percent of all Treasury issues. Since then, however, the Fed has maintained a steady level of Treasury debt, and the third round of quantitative easing, like the first, is mostly focused on the purchase of mortgage-backed securities. This year, as CNBC reports, the Fed has been a modest player in the market for Treasury debt:

Mom-and-pop investors, and not the Federal Reserve, have been the ones most responsible for driving the mad dash to government debt, according to newly released data…The demand among average investors has swelled so much, in fact, that they bought more Treasurys in the first quarter than foreigners and the Fed combined.

Households picked up about $170 billion in the low-yielding government debt during the quarter, while foreigners increased their holdings by $110 billion. The Fed, meanwhile, actually slightly decreased its net holdings.

So Romney is, once again, plucking a scary number he seems to have heard from a tea party symposium somewhere and mindlessly regurgitating it to a receptive audience. But he’s wrong. There was a period of about six months during 2011 when the Fed really was hoovering up a big share of all Treasury debt. But that was a one-time deal more than a year ago, and since then the big buyers of Treasury bonds have mostly been the usual suspects: foreigners and US households.

Read the full transcript of Romney’s remarks at the private fundraiser.