Philip Klein argues that the Todd Akin affair could mark a “watershed moment” for the conservative movement:

In recent years, we’ve become used to a typical pattern when conservative candidates have come under fire for making controversial or ill-informed statements. Democrats and their liberal allies pounce, as do some Republicans and even 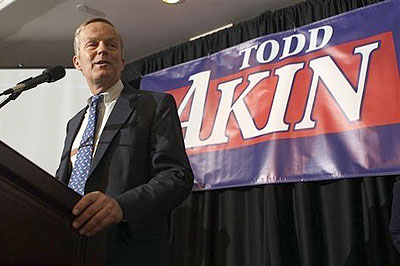 conservative pundits. But many on the right are reluctant to join them, because they see a fellow conservative under attack by the Left.

….But in the case of Akin, this usual cycle didn’t hold. When Akin made his infamous comments about rape and pregnancy (“If it’s a legitimate rape, the female body has ways to try to shut that whole thing down”), the condemnation was swift and almost unanimous. It wasn’t just liberals who were excoriating Akin, and it wasn’t just establishment Republicans in Washington. The conservative base and Beltway Republicans united against Akin.

….When all the dust settles on the Missouri Senate race, the Akin mess could be looked back upon as marking a shift in the standards that those on the Right apply to conservative candidates.

You would probably expect me to have a more cynical take on this. And you’d be right!

Klein says that conservatives are finally outgrowing their torches and pitchforks stage, and Exhibit A is the GOP’s vice presidential pick this year. Instead of a cultural show horse like Sarah Palin, it’s a workhorse like Paul Ryan. “What excites conservatives most about him,” says Klein, “are his policy smarts, his wonky understanding of budget minutiae.”

Please. Conservatives are excited about Ryan because he’s a true believer, not because they’ve developed a sudden love of budget wonkery. They would have been equally ecstatic about Bobby Jindal or Marco Rubio, and they’re breathing a sigh of relief that Romney didn’t pick Rob Portman or Tim Pawlenty, both of whom are plenty serious policy wonks but don’t have quite the right-wing fire in their eyes that the other guys do.1

As for Akin, I agree that the unanimity of the Republican backlash against him has been impressive. But honestly, this has nothing to do with a more serious approach to politics. As Klein himself notes, nobody in the GOP wanted Akin in the first place, not the tea party and not the establishment. So he was friendless from the start. More importantly, everyone understands that Akin’s remarks were so outrageous that they might genuinely cost him the election — and with it, Republican control of the Senate. Conservatives have been pretty explicit about this. They want him to step down for the good of the party. That’s the motivation here, not the fact that Akin isn’t a serious enough policy guy.

1I suspect that a lot of conservatives are also suffering from the Newt Gingrich delusion here. Remember the Gingrich boomlet during the primaries? And do you remember that one of the things that got everyone excited about him was the idea that he was such a brilliant speaker that he’d mop up the debate floor with Barack Obama? Conservatives were really taken with the idea that Obama’s smarts were just an illusion manufactured by the liberal media, and Gingrich was the guy who could rip away away the facade and leave Obama a quivering husk. I think they have the same delusion about Ryan.