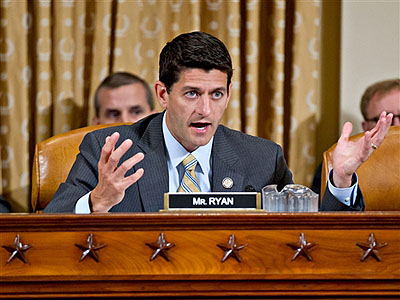 I’ve written enough about Paul Ryan in the past that I don’t feel a burning desire to rewrite all that stuff right this minute. Plenty of time for that later. But I do have a few comments about the reaction so far to Mitt Romney’s choice of Ryan as his VP:

Overall, I think Democrats got the better of things today. They can attack Ryan’s budget proposals, they can mock his jejune Ayn Rand fixation, and they can credibly start demanding that Romney and Ryan put more flesh on their policy proposals. The tea party crowd thinks this is great because they’re convinced that Middle America will really and truly come to love their scorched-earth approach to the federal government if only someone is brave enough to stand up and really sell it. This is a fantasy, and smart Republicans like Romney know it, which is why he’s so assiduously avoided policy specifics. But having Ryan on the ticket is going to make it harder to keep the fever-eyed contingent under control.

In any case, I’ll repeat what I said this morning: Ryan’s just the VP. He presents plenty of opportunities for attack, but he won’t radically change the course of the campaign. Liberal firepower should remain mostly trained on Romney. He’s the guy that voters care about, not Ryan.

UPDATE: Apropos of my comment about not getting too distracted by Paul Ryan, Philip Klinkner sends along this 1988 quote from Lee Atwater to Dan Quayle:

You were the best rabbit we ever had. Let them chase you and they’ll stay off the important things.

Roger that. Obviously this weekend is going to be all about Ryan, but in the longer term let’s keep most of our focus on the important things.