It’s been about six hours since my last Paul Ryan post, so I guess I’m allowed to do another one now without turning my blog into Paul Ryan Central. I’ve been emailing with a friend about something that might be surprising if it’s true: the unexpectedly blunt tone of the press coverage of the Ryan announcement. In the past, the press has been pretty friendly toward Ryan, thanks to the Beltway’s obsession with “adult” conversations about budget deficits. And yet, it’s not clear that this is how the media has been covering Ryan for the past few days:

Note that the reporting is not framing Ryan’s budget as debt reduction, but entitlement cuts, which seems new. And this coverage zeitgeist, in turn, seems to at least be leading some writers to match the Ryan mythologies that the press has bought (e.g., bipartisan, work-across-the-aisle-guy, etc.) to his voting record 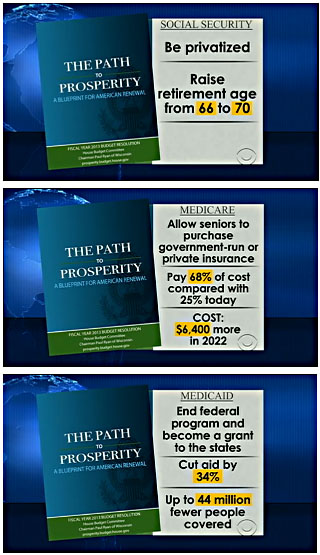 and actual accomplishments. See, most surprisingly to me, Dickerson going in-depth on this.

Maybe it’s just a flash of negativity before the love-fest of the convention, but it struck me as notable given that I did not expect this since the press really hasn’t taken this approach with Ryan before in any meaningful way.

That is interesting! Assuming it’s true, of course, something I’m not entirely sure of. It sounds plausible, but I haven’t been following the press coverage diligently enough to agree with total confidence. As one data point, however, take a look at the three screen shots on the right from the CBS Evening News on Saturday, courtesy of Uggabugga. Those are pretty straightforward.

I imagine that part of this has been driven by Democratic attacks on Ryan, and part has been driven by the media’s preference for covering conflict, especially during presidential campaigns. And right now, the conflict is more over entitlement cuts than it is over deficit reduction. Still, it’s an interesting observation. It’s possible that the longtime media crush on Ryan has faded a bit over the past year as Ryan has become such an explicitly partisan warrior. We’ll see.

UPDATE: Another reader, one who ingests a fair bit of cable news, agrees with reader #1:

I can totally confirm your correspondent’s impression of this, and I’ve been pleasantly surprised by it. Covering conflict, yes, but also the realization that this is no longer just some whacko proposal that’s never going to go anywhere but is the de facto budget outline for the major party challenger to the president who might actually win if things go badly for Obama.