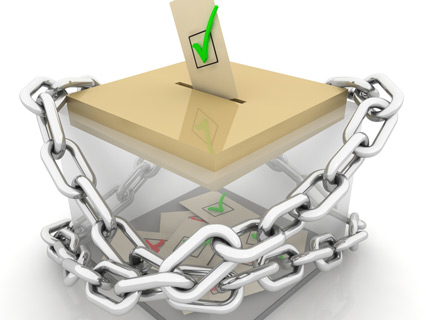 Earlier this week I wrote about the long-standing hope of Democrats that demographic changes are working in their favor and will soon create a durable national Dem majority. There are several moving parts to this theory, but the two big ones are (a) young people are trending Democratic, and (b) the Dem-leaning nonwhite population is getting bigger and bigger. As far as I know, Republicans don’t really deny that these things are happening. After all, the trend in the youth vote jumps out in every poll, and the growing nonwhite share of the population is regularly front-page news. George Bush and Karl Rove, who desperately wanted to pass a comprehensive immigration bill in 2006 in order to stanch the flow of Hispanic votes into the Democratic column, knew perfectly well how important this was.

So what’s the Republican response to all this? They have two options:

Eventually, they might be forced to adopt Option 1, but for now they seem to have abandoned the idea of pushing back against their base (as Democrats eventually did in the late ’80s), and instead have gone all in on Option 2. There are two elements to this. The first is to push ever harder for higher turnout among the Fox News set. That was pretty successful in 2010, when the “enthusiasm gap” powered a Republican landslide that year. 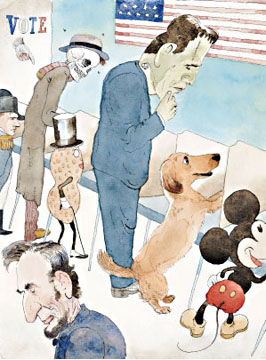 But there’s only so far that can go. At some point, turnout is high enough that you’re pushing against a wall. So the second element of the strategy is to mount a last-ditch effort to reduce turnout among the young and the nonwhite. This has mostly taken the form of a decadelong campaign to pass photo ID laws, a campaign I wrote about in “The Dog That Voted,” part of a package in our current issue. These laws disproportionately affect turnout among the young, the poor, and minorities, and have been passed almost exclusively in states controlled by Republicans. The latest example is Pennsylvania, which recently passed a photo ID law and then suddenly discovered—four months before an election!—that nearly 10 percent of their residents have no photo ID. But that’s just an average number and doesn’t apply equally to all groups. If other states are any guide, it’s something like 20 percent for the young, the poor, and the nonwhite. Attorney General Eric Holder, for one, is finally calling this what it is, saying this about Texas’s proposed voter ID law:

Under the proposed law, concealed handgun licenses would be acceptable forms of photo ID, but student IDs would not. Many of those without IDs would have to travel great distances to get them, and some would struggle to pay for the documents they might need to obtain them. We call those poll taxes.

So how well will the GOP’s turnout strategy work? In the short term, fairly well. Cranking up the demagoguery can probably increase turnout among Republican-leaning groups by a couple of points, and photo ID laws might suppress the vote among Democratic-leaning groups by a point or so. But once that’s done, it’s done. There’s nothing more Republicans can do to affect turnout. At that point, they can rely a bit on demographic trends of their own (the Sun Belt is growing, the elderly share of the population is growing), but that probably won’t be enough. They’ll also have more and more money on their side, but that’s not enough either. After all, there are only so many ad spots available to buy.

So does that mean that demography is destiny and Republicans will eventually fade away? Of course not, and anyone who seriously thinks so needs to wise up. Republicans will try to hold on to their current base as long as they can, but when that finally starts to wear thin, they’ll do what they have to do to appeal to some new demographic groups. It seems barely conceivable now, but it’s inevitable. It’s what all political parties do when the chips are down and they no longer have any choice.

At least, that’s what I want to believe. Because the alternative is worse: ever-worsening racial polarization as whites continue fleeing to the Republican Party. If both parties tacitly accept this, with Republicans gaining more and more of the white vote and Democrats gaining more and more of the nonwhite vote, we could end up with one party almost exclusively representing whites and another party almost exclusively representing nonwhites. That’s not much of a recipe for problem solving or social harmony. But it could happen.