In 1985, after he was forced out of American Express, Sandy Weill went on an acquisitions tear. He took over a consumer finance company, then acquired an insurance company, then a retail brokerage, then Travelers Insurance, then another brokerage, an investment bank, and finally a merger of his entire empire with Citigroup. But that last step required more than money. Merging an investment bank with a commercial bank required a repeal of Glass-Steagall, the New Deal law that had broken up commercial and investment banks in the first place. So Weill went to work, and a year later Glass-Steagall was gone. Sandy Weill was, in a very real sense, the midwife of repeal, or, as he preferred to call himself at the time, “The Shatterer of Glass-Steagall.” 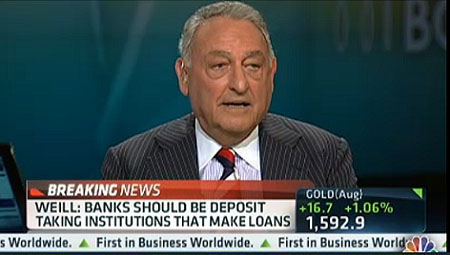 For years Weill has denied that repeal played any role in the 2008 financial crisis. Today, it appears that he’s changed his mind:

Weill did a 180 on CNBC’s Squawk Box this morning, saying that he now believes big banks — like, presumably, Citigroup — should be broken up:

What we should probably do is go and split up investment banking from banking, have banks be deposit takers, have banks make commercial loans and real estate loans, have banks do something that’s not going to risk the taxpayer dollars, that’s not too big to fail.

Sandy Weill advocating for the reinstatement of Glass-Steagall is among the biggest flip-flops imaginable. (In political terms, it would be akin to Rick Santorum announcing he was becoming a GLAAD spokesman.) And when Weill called for a bank breakup this morning, CNBC’s incredulous anchors gave him a chance to walk back what they assumed was a spur-of-the-moment gaffe. But Weill didn’t budge:

I’m suggesting that they be broken up so that the taxpayer will never be at risk, the depositors won’t be at risk, the leverage of the banks will be something reasonable.

To some, Weill’s sudden about-face reeks of hypocrisy. Others are picking it over for evidence of ulterior motives. (Could Weill be trying to undermine his former protégé and another too-big-to-fail banker, JPMorgan CEO Jamie Dimon?)

Who knows? It’s actually not all that uncommon for elder statesmen who are no longer running things to have a change of heart, and it seems likely that’s what’s happened here. And like other similar U-turns, it probably won’t have any impact at all. Nonetheless, it’s pretty intriguing. When even Sandy Weill thinks banks have gotten too big to fail, is there anyone left to disagree?