Did you hear that the city of San Bernardino recently followed the city of Stockton into bankruptcy? Did you also hear that it was mostly because of skyrocketing pension costs doled out to union workers 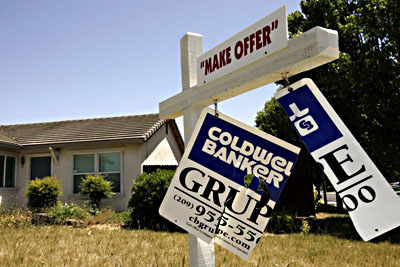 in years past? I’ve been meaning to write about this, but it’s local stuff and I never got around to it. Luckily, Harold Meyerson did, so I can just steal from him:

….Both Stockton and San Bernardino depend on property and sales taxes for their revenues. With the value of their housing stock and the disposable income of their residents both in free-fall, the cities saw their revenues hemorrhage. That’s why they filed for bankruptcy—not because of rising costs.

I should note that I’m not sanguine about public sector pensions. They’re growing, and they’re a problem. We can argue forever about how justified they were, whether they were simply a quid pro quo for low salaries, and about the fact that cowardly public officials were full partners in eagerly pushing off costs into the future when they’d no longer be in office. But they’re still a problem.

However, Harold is right: Stockton is practically the poster child for the housing bust “ghost town,” a city where entire neighborhoods were all but abandoned mere years after they were built. That’s the proximate cause of their bankruptcy, and San Bernardino’s too. Public sector pensions were just a bit player.

NOTE: You might also have heard of a third California city that recently declared bankruptcy, Mammoth Lakes. But that’s a unique case, not caused by housing or pensions or anything related. They lost a big lawsuit, and they can’t pay the judgment. It’s sui generis.