I’m a lifelong liberal. I think it would be great if the United States adopted some kind of genuine national healthcare program. It’s probably my single biggest domestic policy obsession, and I assume many of my readers feel the same way.

Even so, I’ve got to ask: am I the only one who was a bit gobsmacked at the lengthy tribute to the NHS during the opening ceremonies at the Olympics 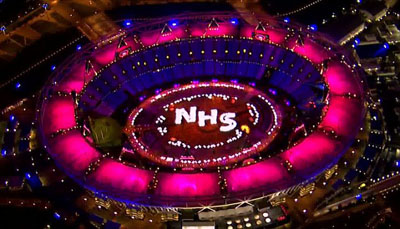 Also: I heard a lot of complaining on Twitter about the NBC commentary during the first hour or so of the show. But I have to tell you, if it weren’t for that commentary I wouldn’t have had a clue what was going on. That was Glastonbury Tor? Really? And when the tree rose out of the ground and all those grimy folks came marching out, would I have figured out that this marked the transition from agrarian England to the Industrial Age? No siree. (As for the dancing plutocrats, I’m at a loss for words.) Nor would I have figured out that the Frankie and June segment was supposed to represent yet another transition, this time into the digital age. (And was it really supposed to also represent a transition from nightmares of one kind to a “parent’s nightmare” of a different kind? Was that actually Danny Boyle’s intent, or did the NBC guys just make that up?)

I dunno. I wasn’t a fan of the Beijing opening ceremonies, which frankly struck me as a message that the synchronized hordes of the Middle Kingdom would destroy the decadent West before long. So I was happy to see the decadent West strike back with something a bit more chaotic and free form. The opening lines from Shakespeare were a nice, understated rebuttal to Beijing. But I’d still opt for a show that you could mostly understand without it being explained in real time.