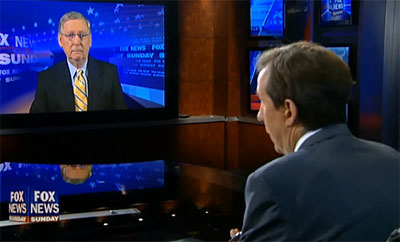 On Sunday Chris Wallace interviewed Mitch McConnell, the Republican leader in the Senate, and tried manfully to get him to comment on the “replace” part of “repeal and replace.” He didn’t succeed:

WALLACE: One of the keys to “Obama-care” is that it will extend insurance access to 30 million people who are now uninsured. In your replacement, how would you provide universal coverage?

MCCONNELL: Well, first, let me say the single the best thing we could do for the American health care system is to get rid of Obamacare….

WALLACE: But if I may, sir, you’ve talked about repeal and replace. How would you provide universal coverage?

MCCONNELL: I will get to it in a minute. The first step we need to take is to get rid of what is there….

WALLACE: But respectfully sir, because we are going to run out of time and I just want to ask, what specifically are you going to do to provide universal coverage to the 30 million people who are uninsured?

MCCONNELL: That is not the issue….

WALLACE: You don’t think the 30 million people that were uninsured is an issue?

MCCONNELL: Let me tell you what we are not going to do….

I think it’s safe to say that Republicans have exactly zero intention of replacing Obamacare with anything at all except a few miscellaneous gifts to their campaign contributors (state-level regulation for insurance companies, tort reform for the Chamber of Commerce, etc.). The 30 million uninsured will be quickly and completely forgotten, as McConnell’s robotic dedication to GOP talking points showed. How about if we all stop pretending that they were ever serious about this in the first place?