There’s a category of political quarreling that I tend to ignore at first, but then slowly get sucked into as the full scale of the hypocrisy at issue becomes apparent. Today we have a fine example: the Republican outrage over waivers recently granted to certain states for their welfare programs. Sure, the waivers were largely requested by Republican governors, and giving states more authority over block-grant funds is usually something Republicans approve of, but it still seemed like a bit of a yawn. Just the usual political nonsense.

But Dylan Matthews of Wonkbook has gotten hold of a letter from HHS Secretary Kathleen Sebelius to Utah Senator Orrin Hatch that makes clear just how stunning this particular piece of hypocrisy really is. Republicans are screaming that the waivers will water down the work requirements of the 1995 welfare reform bill, but it turns out that as recently as 2005 a whole bunch of Republican governors not only supported these kinds of waivers, but signed a letter requesting waivers more expansive than the ones Sebelius just granted. As a public service, I’ve included an excerpt from Sebelius’s letter below, with the names of various Republican notables highlighted — including one Willard Mitt Romney, who I believe was governor of Massachusetts at the time.

I don’t doubt that Republicans will invent some reason that the 2005 waivers were entirely different from the waivers Sebelius just granted. That’s politics. But it does demonstrate that GOP shamelessness continues to reach new heights. They really just don’t care anymore, do they? 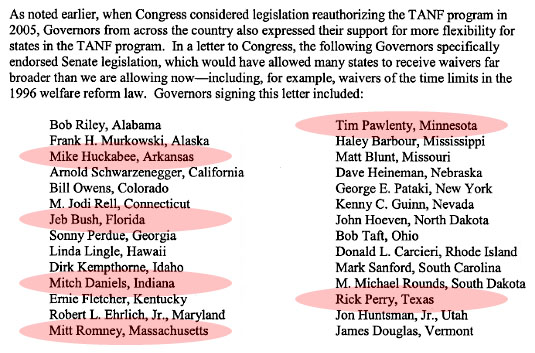